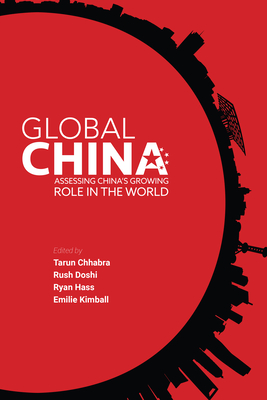 The global implications of China's rise as a global actor

In 2005, a senior official in the George W. Bush administration expressed the hope that China would emerge as a "responsible stakeholder" on the world stage. A dozen years later, the Trump administration dramatically shifted course, instead calling China a "strategic competitor" whose actions routinely threaten U.S. interests.

Both assessments reflected an underlying truth: China is no longer just a "rising" power. It has emerged as a truly global actor, both economically and militarily. Every day its actions affect nearly every region and every major issue, from climate change to trade, from conflict in troubled lands to competition over rules that will govern the uses of emerging technologies.

To better address the implications of China's new status, both for American policy and for the broader international order, Brookings scholars conducted research over the past two years, culminating in a project: Global China: Assessing China's Growing Role in the World. The project is intended to furnish policy makers and the public with hard facts and deep insights for understanding China's regional and global ambitions.

The initiative draws not only on Brookings's deep bench of China and East Asia experts, but also on the tremendous breadth of the institution's security, strategy, regional studies, technological, and economic development experts.

Areas of focus include the evolution of China's domestic institutions; great power relations; the emergence of critical technologies; Asian security; China's influence in key regions beyond Asia; and China's impact on global governance and norms.

Global China: Assessing China's Growing Role in the World provides the most current, broad-scope, and fact-based assessment of the implications of China's rise for the United States and the rest of the world.

Tarun Chhabra was a senior fellow at Georgetown University's Center for Security and Emerging Technology, and director of the Brookings Institution's Project on International Order and Strategy. He previously served on the National Security Council staff and Department of Defense. He has written on U.S. grand strategy, U.S.-China relations, and U.S.- allied technology cooperation.Rush Doshi is a former director of the Brookings China Strategy Initiative and fellow in the Brookings Foreign Policy program. He is also a former fellow at Yale Law School's Paul Tsai China Center. He is the author of The Long Game: China's Grand Strategy to Displace American Order.Ryan Hass is the Armacost Chair in the Foreign Policy program at Brookings. Hass also is a nonresident fellow at Yale Law School's Tsai China Center, and a senior advisor at McLarty Associates and The Scowcroft Group. He is author of Stronger: Adapting America's China Strategy in an Age of Competitive Interdependence.Emilie Kimball is an executive assistant in the Foreign Policy program at the Brookings Institution. Prior to working at Brookings, she served as a staff officer on the National Security Council from 2015 to 2018, where she helped manage the national security decisionmaking process and staffed the President on foreign travel.