Musui's Story: The Autobiography of a Tokugawa Samurai (Paperback) 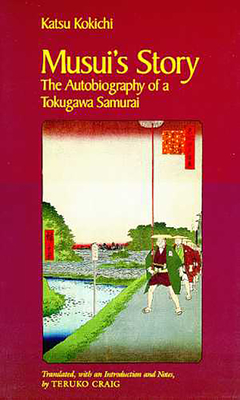 Musui's Story: The Autobiography of a Tokugawa Samurai (Paperback)


Not On Our Shelves—Ships in 1-5 Days
A series of picaresque adventures set against the backdrop of a Japan still closed off from the rest of the world, Musui's Story recounts the escapades of samurai Katsu Kokichi. As it depicts Katsu stealing, brawling, indulging in the pleasure quarters, and getting the better of authorities, it also provides a refreshing perspective on Japanese society, customs, economy, and human relationships.

From childhood, Katsu was given to mischief. He ran away from home, once at thirteen, making his way as a beggar on the great trunk road between Edo and Kyoto, and again at twenty, posing as the emissary of a feudal lord. He eventually married and had children but never obtained official preferment and was forced to supplement a meager stipend by dealing in swords, selling protection to shopkeepers, and generally using his muscle and wits.

Katsu's descriptions of loyalty and kindness, greed and deception, vanity and superstition offer an intimate view of daily life in nineteenth-century Japan unavailable in standard history books. Musui's Story will delight not only students of Japan's past but also general readers who will be entranced by Katsu's candor and boundless zest for life.
"This charming book...portrays Tokugawa society as it was actually lived, instead of as it was portrayed in moralizing tracts and governmental ordinances. Attractively translated by Teruko Craig, it depicts the life of a man born into a family with the hereditary privilege of audience with the shogun, yet he shamelessly consorted with the riffraff of Edo, ran a protection racket, lied, cheated, and stole....Craig is to be commended for the felicity of her translation and for her clear presentation of a complex social order in the Introduction....Anyone interested in Japanese history and society or in how people interact with each other in whatever age or place will enjoy reading this book."—Monumenta Nipponica

"Tells the life of Katsu Kokichi, a samurai on the lower fringe of his class who gave up the aspirations expected of him to mix with the scruffier elements of the Edo streets. . . . Teruko Craig has my applause for selecting what may be a unique document, translating it so gracefully, and supplying it with an informative introduction and annotation. . . . Enjoyable reading."—Journal of the Association of Teachers of Japanese

"This valuable translation provides many insights into Japanese life. . . . Teruko Craig is to be commended on the vivid picture of this slice of Tokugawa life."—Journal of Royal Asiatic Society

"A delightful little book. . . . one of those one sit, cover-to-cover reads."—American Asian Review

"A colorful, involving glimpse of the gritty side of a distinctly foreign culture."—Kirkus Reviews