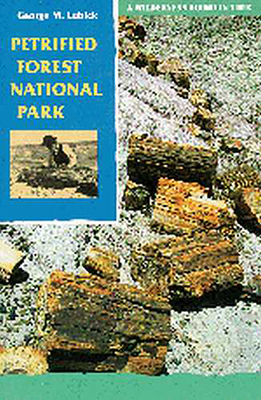 
Special Order—Subject to Availability
Yellowstone, Yosemite, the Grand Canyon—a few American national parks enjoy amusement-park status, eclipsing many other beautiful and significant parks due to their heavy political support and spectacular sights. Visitors to Petrified Forest National Park in northeastern Arizona can escape from the litter, snack bars, and crowds of the recreational parks to a 200-million-year-old ecosystem locked in stone. Enhanced by the unrivaled, colorful beauty of the adjacent Painted Desert, Petrified Forest National Park has captivated visitors since the area was discovered by early explorers. The history of the huge fossilized forest parallels that of Arizona. It was discovered and looted by adventurers and largely ignored by the government until President Theodore Roosevelt made it a national monument in 1906. The forest's location along Route 66 brought a large number of visitors during the time it enjoyed only monument status, but lack of funding for protection allowed much damage and theft of fossilized wood.

Petrified Forest National Park: A Wilderness Bound in Time speeds the reader on an ancient ecological journey, from the time of dinosaurs to the discovery of their Triassic fossils and on through a century of political maneuvering to create a place for the forest in American history. George Lubick describes how a dedicated few understood the environmental importance as well as the unique beauty of the park's Triassic Chinle Formation and the Painted Desert. Nearly a million people "visit the Triassic" annually; this environmental history of the ancient forest is important for those who know the park as well as those interested in natural America. Petrified Forest National Park is one of the few complete histories of any national park, a well-told, balanced treatment of the environmental, political, and historical factors that shape America's natural history.
George M. Lubick is chair of the Department of History and an associate professor at Northern Arizona University.
"A perceptive and engaging study of the history of the park and immediate region. If the book receives the readers it deserves, Petrified Forest National Park should increase visitation and will definitely expand understanding of this park, its role, and the whole park system. . . . A very readable, fascinating study."—Environmental History

"Lubick doesn't ignore the delicious tidbits that make history memorable: aging John Muir's involvement, for example, or the nettlesome interference of a lady who ran the nearby Lion Farm and caused the rapid thinning of the superintendent's hair. Every park and monument deserve such a history."—Wildflower