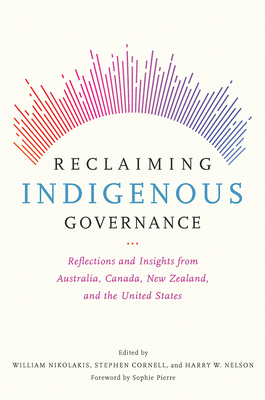 
Not On Our Shelves—Ships in 1-5 Days
Reclaiming Indigenous Governance examines the efforts of Indigenous peoples in four important countries to reclaim their right to self-govern. Showcasing Native nations, this timely book presents diverse perspectives of both practitioners and researchers involved in Indigenous governance in Canada, Australia, New Zealand, and the United States (the CANZUS states).

Indigenous governance is dynamic, an ongoing relationship between Indigenous peoples and settler-states. The relationship may be vigorously contested, but it is often fragile—one that ebbs and flows, where hard-won gains can be swiftly lost by the policy reversals of central governments. The legacy of colonial relationships continues to limit advances in self-government.

Yet Indigenous peoples in the CANZUS countries are no strangers to setbacks, and their growing movement provides ample evidence of resilience, resourcefulness, and determination to take back control of their own destiny. Demonstrating the struggles and achievements of Indigenous peoples, the chapter authors draw on the wisdom of Indigenous leaders and others involved in rebuilding institutions for governance, strategic issues, and managing lands and resources.

This volume brings together the experiences, reflections, and insights of practitioners confronting the challenges of governing, as well as researchers seeking to learn what Indigenous governing involves in these contexts. Three things emerge: the enormity of the Indigenous governance task, the creative agency of Indigenous peoples determined to pursue their own objectives, and the diverse paths they choose to reach their goal.
William Nikolakis is a lawyer in both Australia and Canada. He is a lecturer in the Faculty of Forestry, University of British Columbia, and the executive director of the Gathering Voices Society, a Vancouver-based foundation focused on building land management partnerships between Indigenous communities and the natural resources sector.

Stephen Cornell is faculty chair of the Native Nations Institute at the University of Arizona, where he also is emeritus professor of sociology, emeritus director of the Udall Center for Studies in Public Policy, and affiliate faculty in the College of Law. He co-founded the Harvard Project on American Indian Economic Development.

Harry W. Nelson is an associate professor in the Department of Forest Resources Management at the University of British Columbia. His interest is natural and environmental policy emphasizing forestland and forest resources and improving the sustainability of Canadian forests and the communities and ­businesses that rely on them.