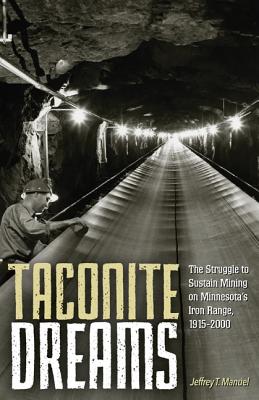 The Iron Range earned its name honestly: it was once among the world’s richest iron ore mining districts. The Iron Range propelled the U.S. steel industry in the late nineteenth century, and iron mining sustained generations in the region with work and a strong economy. But long before most other parts of the country faced the realities of industrial decline, Minnesota’s Iron Range was already striving to maintain its core industry.

In Taconite Dreams: The Struggle to Sustain Mining on Minnesota’s Iron Range, 1915–2000, Jeffrey T. Manuel examines how the region fought the dislocation that came with economic changes, technological advances, and global shifts in industrial production. On the Iron Range, efforts included the development of taconite mining as a technological fix for the drop in hematite mining. Manuel describes the Iron Range’s modern history and how the downturn was opposed by individuals, civic groups, and commercial interests. The first book dedicated to thoroughly exploring this era on the Iron Range, Taconite Dreams demonstrates how the area fit into a larger story of regions wrestling with deindustrialization in the twentieth century. The 1964 taconite amendment to Minnesota’s constitution, the bruising federal pollution lawsuit that closed a taconite plant, and the Iron Range Resources and Rehabilitation Board’s economic development policy are all discussed.

Ultimately, the resistance against economic decline is also a battle over mining’s memory and legacy, one that continues today. Manuel’s history sheds much-needed light on this important yet widely overlooked mining region as well as the impact of the past century’s struggles on the people who call it home.

"Taconite Dreams is an important contribution to the national and international history of industrial decline. By taking us to the Mesabi Iron Range in Minnesota, Jeffrey T. Manuel connects the resource frontier to the large cities of the industrial heartland—an analysis that is long overdue."—Steven High, Concordia University

"Taconite Dreams is a great example of how, when undertaken intelligently, local historical studies can have global reach. Jeffrey T. Manuel provides a mirror for communities across the world, from the mining regions of South Africa to the oil fields of North Dakota, through which they can assess the opportunities and threats contained in economic development strategies that rely on extractive industries. This book challenges not only planners, politicians, and labor activists, but also we public historians who construct images of the past that might influence debates about future development strategies."—Peter Rachleff, Executive Director, East Side Freedom Library

"In Taconite Dreams, Jeffrey T. Manuel has done something difficult and truly important. He’s built a historical bridge from the nostalgic, often over-romanticized early days of iron mining to the all-too-real struggles of our present Iron Range region. He takes the controversial issues of economic decline, environmental impact, and cultural struggles and provides a clear-eyed assessment of how things got this way and what it might mean for the future."—Aaron Brown, journalist, author, and host of public radio’s Great Northern Radio Show

"One of the most fascinating and detailed accounts ever of the challenges faced over the years by the mining industry in northeastern Minnesota."—Ely Timberjay

"Manuel brings years of research about the taconite industry without the local Iron Range baggage and biases."—Minnesota Brown

"The book stands out for the depth of its perspective on issues shaping other post-industrial places in the United States and around the world. Manuel effectively shows the economic and social changes behind shifts in policies that led to the current roles of mining, tourism, and other industries in this region."—Minnesota History

"A highly readable and sympathetic but neutral examination of a crisis period in the author’s home state. The photos help the reader to visualize the range, the technology, and the people. Beyond the recapturing of the history of the range in the twentieth century, important as that is, Taconite Dreams reminds those who have forgotten and informs those who never knew, of the downside of the postindustrial economy."—Technology and Culture