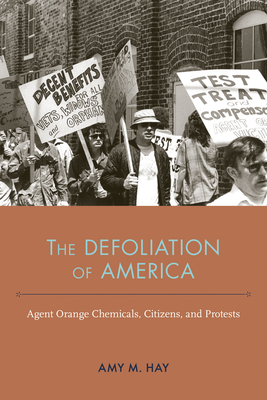 In The Defoliation of America: Agent Orange Chemicals, Citizens, and Protests, Amy M. Hay profiles the attitudes, understandings, and motivations of grassroots activists who rose to fight the use of phenoxy herbicides, or Agent Orange chemicals as they are commonly known, in various aspects of American life during the post-WWII era. Hay focuses her analysis on citizen responses to illuminate how regulatory policies were understood, challenged, and negotiated, contributing to a growing body of research on chemical regulatory policies, risk society, and hazardous chemicals. This volume uncovers new understandings about the authority of the state and its obligation to society, the role of scientific authority and expertise, and the protests made by various groups of citizens.

First introduced in 1946, phenoxy herbicides mimic hormones in broadleaf plants, causing them to “grow to death” while grass, grains, and other monocots remain unaffected. By the 1950s, millions of pounds of these chemicals were produced annually for use in brush control, weed eradication, forest management, and other agricultural applications. Pockets of skepticism and resistance began to appear by the late 1950s, and the trend intensified after 1962 when Rachel Carson’s Silent Spring directed mainstream attention to the harm modern chemicals were causing in the natural world. It wasn’t until the Vietnam War, however, when nearly 19 million gallons of Agent Orange and related herbicides were sprayed to clear the canopy and destroy crops in Southeast Asia, that the long-term damage associated with this group of chemicals began to attract widespread attention and alarm.

Using a wide array of sources and an interdisciplinary approach, Hay contributes to the robust fields of chemical toxicity, regulation, environmental management, and public health. This study of the scientists, health and environmental activists, and veterans who fought US chemical regulatory policies and practices reveals the mechanisms, obligations, and constraints of state and scientific authority in mid-twentieth-century America. Hay also shows how these disparate and mostly forgotten citizen groups challenged the political consensus and contested government and industry narratives of chemical safety.

Amy M. Hay is associate professor in the Department of History at the University of Texas Rio Grande Valley. She is contributor to Hazardous Chemicals: Agents of Risk and Change, 1800–2000 and Environmental Change and Agricultural Sustainability in the Mekong Delta.

“The Defoliation of America is an extraordinary achievement. Amy Hay argues that protesters fought the use of chemical herbicides in the US and internationally (especially during the Vietnam War). Hay reveals how a diverse group of advocates challenged government, military, and corporate claims that Agent Orange herbicides were safe. More than any other study, The Defoliation of America demonstrates the extent of the widespread use of Agent Orange herbicides in America that coincided with extensive deployment during the Vietnam War and the impassioned protests these actions inspired.”
—Frederick Rowe Davis, author of Banned: A History of Pesticides and the Science of Toxicology

“The Defoliation of America is a wide-ranging, detailed study of arguably the most important anti-toxics movement in modern American history—the protests against the use of ‘Agent Orange.’ Displaying excellent research, with a focused empathy on the stories of the victims and the activists, this book makes significant contributions to the field of American environmental and anti-toxics activism.”
—Robert Gioielli, author of Environmental Activism and the Urban Crisis: Baltimore, St. Louis, Chicago


“A superb telling of the human side of the Agent Orange story, expertly integrating the story of women-led protests of the chemical’s hazardous effects in the US with the history of war in Southeast Asia, racial inequality, and the politicization of science.”
—Ellen Griffith Spears, author of Rethinking the American Environmental Movement post-1945

“The Defoliation of America offers a truly new history of chemicals, specifically phenoxy herbicides. It makes a valuable contribution to multiple fields and shows us that grave concern toward chemicals resided as strongly in neighborhoods, churches, and the radio airwaves, as it did in the pages of Silent Spring or demonstrations of Earth Day.”
—David D. Vail, author of Chemical Lands: Pesticides, Aerial Spraying, and Health in North America's Grasslands since 1945