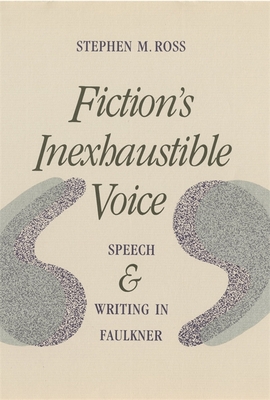 William Faulkner recognized voice as one of the most distinctive and powerful elements in fiction when he delivered his Nobel Prize acceptance speech, describing the last sound at the end of the world as man's "puny inexhaustible voice, still talking." As a testimonial of an artist's faith in his art, the speech raised the value of voice to its highest reach for man, as "one of the props, the pillars to help him endure and prevail."

In Fiction's Inexhaustible Voice, Stephen Ross explores the nature of voice in William Faulkner's fiction by examining the various modes of speech and writing that his texts employ. Beginning with the proposition that voice is deeply involved in the experience of reading Faulkner, Ross uses theoretically grounded notions of voice to propose new ways of explaining how Faulkner's novels and stories express meaning, showing how Faulkner used the affective power of voice to induce the reader to forget the silent and originless nature of written fiction. Ross departs from previous Faulkner criticism by proceeding not text-by-text or chronologically but by construction a workable taxonomy which defines the types of voice in Faulkner's fiction: phenomenal voice, a depicted event or object within the represented fictional world; mimetic voice, the illusion that a person is speaking; psychic voice, one heard only in the mind and overheard only through fiction's omniscience; and oratorical voice, an overtly intertextual voice which derives from a discursive practice--Southern oratory--recognizable outside the boundaries of any Faulkner text and identifiable as part of Faulkner's biographical and regional heritage. In Faulkner's own experience, listening was important. As he once confided to Malcolm Cowley, "I listen to the voices, and when I put down what the voices say, it's right." In Fiction's Inexhaustible Voice, Ross conducts a careful analysis of this fundamental source of power in Faulkner's fiction, concluding that the preponderance of voice imagery, represented talking, verbalized thought, and oratorical rhetoric and posturing makes the novels and stories fundamentally vocal. They derive their energy from the play of voices on the imaginative field of written language.
STEPHEN M. ROSS is Program Officer in the Division of Seminars at the National Endowment for the Humanities in Washington, D.C.