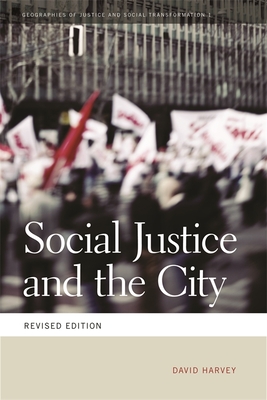 Throughout his distinguished and influential career, David Harvey has defined and redefined the relationship between politics, capitalism, and the social aspects of geographical theory. Laying out Harvey's position that geography could not remain objective in the face of urban poverty and associated ills, Social Justice and the City is perhaps the most widely cited work in the field.

Harvey analyzes core issues in city planning and policy--employment and housing location, zoning, transport costs, concentrations of poverty--asking in each case about the relationship between social justice and space. How, for example, do built-in assumptions about planning reinforce existing distributions of income? Rather than leading him to liberal, technocratic solutions, Harvey's line of inquiry pushes him in the direction of a "revolutionary geography," one that transcends the structural limitations of existing approaches to space. Harvey's emphasis on rigorous thought and theoretical innovation gives the volume an enduring appeal. This is a book that raises big questions, and for that reason geographers and other social scientists regularly return to it.
David Harvey is Distinguished Professor of Anthropology at the Graduate Center of the City University of New York. His many books include "A Brief History of Neoliberalism" and "Spaces of Global Capitalism: Towards a Theory of Uneven Geographical Development."