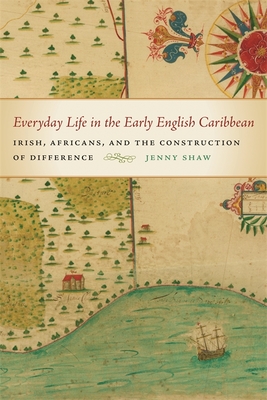 
Not On Our Shelves—Ships in 1-5 Days
Set along both the physical and social margins of the British Empire in the second half of the seventeenth century, Everyday Life in the Early English Caribbean explores the construction of difference through the everyday life of colonial subjects. Jenny Shaw examines how marginalized colonial subjects--Irish and Africans--contributed to these processes. Although their lives are obscured by sources constructed by elites, Shaw overcomes these constraints by pushing methodological boundaries to fill in the gaps, silences, and absences that dominate the historical record and uncovering perspectives that would otherwise remain obscured. Shaw makes clear that each group persisted in its own cultural practices; Irish and Africans also worked within--and challenged--the limits of the colonial regime. Shaw's research demonstrates the extent to which hierarchies were in flux in the early modern Caribbean, allowing even an outcast servant to rise to the position of island planter, and underscores the fallacy that racial categories of black and white were the sole arbiters of difference in the early English Caribbean.
JENNY SHAW is an assistant professor of history at the University of Alabama.