The Politics of Morality: The Church, the State, and Reproductive Rights in Postsocialist Poland (Polish and Polish American Studies) (Paperback) 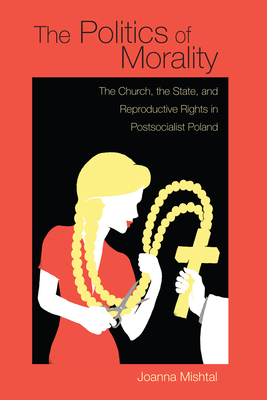 The Politics of Morality: The Church, the State, and Reproductive Rights in Postsocialist Poland (Polish and Polish American Studies) (Paperback)

After the fall of the state socialist regime and the end of martial law in 1989, Polish society experienced both a sense of relief from the tyranny of Soviet control and an expectation that democracy would bring freedom. After this initial wave of enthusiasm, however, political forces that had lain concealed during the state socialist era began to emerge and establish a new religious-nationalist orthodoxy. While Solidarity garnered most of the credit for democratization in Poland, it had worked quietly with the Catholic Church, to which a large majority of Poles at least nominally adhered. As the church emerged as a political force in the Polish Sejm and Senate, it precipitated a rapid erosion of women’s reproductive rights, especially the right to abortion, which had been relatively well established under the former regime.

The Politics of Morality is an anthropological study of this expansion of power by the religious right and its effects on individual rights and social mores. It explores the contradictions of postsocialist democratization in Poland: an emerging democracy on one hand, and a declining tolerance for reproductive rights, women’s rights, and political and religious pluralism on the other. Yet, as this thoroughly researched study shows, women resist these strictures by pursuing abortion illegally, defying religious prohibitions on contraception, and organizing into advocacy groups. As struggles around reproductive rights continue in Poland, these resistances and unofficial practices reveal the sharp limits of religious form of governance.

Joanna Mishtal is an associate professor of anthropology at the University of Central Florida. Her research examines the politics of gender, focusing on reproductive rights, health, and social policies in Poland, her native country.

“One of the many strengths of Mishtal’s study is that she doesn’t just describe a top-down model of power—she also focuses on everyday women of different economic classes and how they negotiated the legal and cultural restrictions on abortion and contraceptives.… I have been raving about this book to anyone who will listen.”—Cosmopolitan Review

“One of Mishtal’s most important contributions is her analysis of the gendering of biopolitics in Poland and the ways the Catholic Church has undertaken a politics of morality based on individual surveillance and political intimidation. Methodologically sophisticated, innovative, and refreshingly free of jargon, this is an important work.”—Michele Rivkin-Fish, author of Women’s Health in Post-Soviet Russia: The Politics of Intervention

“This excellent, insightful ethnography contributes important analysis to studies on Poland’s most recent history as well as anthropology of reproduction and women’s studies. Since ‘Poland is emblematic of the pivotal role of gender in nation-making (197),’ it is also the must-read book for scholars and students interested in gender studies.”—Social Anthropology

“Refreshingly incisive … A compelling ethnographic account… Mishtal's book will interest scholars of feminist activism, political transitions, and political religion as well as anthropologists of Poland and of reproduction. Her very accessible prose makes this book suitable for a wide audience, including undergraduates.”—Anthropologica

“This is the book I have been waiting for. … Meticulously researched and beautifully written … The rich data, critical yet balanced analysis, and comprehensive historical and cultural background all create an invaluable insight into the female experience in twenty-first-century Poland.…This is by far the best book about women in Poland I have ever read.”—Marta Trzebiatowska, Journal of Contemporary Religion