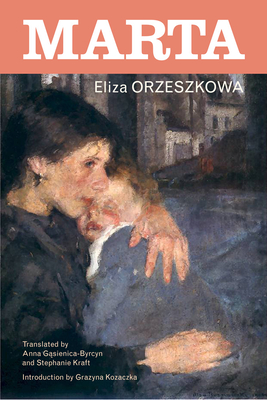 Eliza Orzeszkowa was a trailblazing Polish novelist who, alongside Leo Tolstoy and Henryk Sienkiewicz, was a finalist for the 1905 Nobel Prize in Literature. Of her many works of social realism, Marta (1873) is among the best known, but until now it has not been available in English. Easily a peer of The Awakening and A Doll’s House, the novel was well ahead of the English literature of its time in attacking the ways the labor market failed women.

Suddenly widowed, the previously middle-class Marta Świcka is left penniless and launched into a grim battle for her survival and that of her small daughter. As she applies for job after job in Warsaw—portrayed here as an every-city, an unforgiving commercial landscape that could be any European metropolis of the time—she is told time after time that only men will be hired, that men need jobs because they are fathers and heads of families.

Marta burns with Orzeszkowa’s feminist conviction that sexism was not just an annoyance but a threat to the survival of women and children. It anticipated the need for social safety nets whose existence we take for granted today, and could easily read as an indictment of current efforts to dismantle those very programs. Tightly plotted and exquisitely translated by Anna Gąsienica-Byrcyn and Stephanie Kraft, Marta resonates beyond its Polish setting to find its place in women’s studies, labor history, and among other works of nineteenth-century literature and literature of social change.

Eliza Orzeszkowa (1841–1910) is one of the most prolific and esteemed Polish nineteenth-century prose writers. She was nominated twice for the Nobel Prize in Literature: in 1905 and in 1909. Her influence on Polish literary life was enormous. She inspired Stefan Żeromski, Władysław Reymont, Maria Dąbrowska, and many Polish female writers with her writing and her social justice work. Most of the Polish women’s literature of the post-1863 Uprising period was written with the encouragement and guidance of Orzeszkowa, the most widely appreciated and highly respected Polish woman writer of that time.

“[Marta] reminds you, too, that it’s not just the hottest contemporary novels that are crying out to be translated – it’s also hidden gems like this, that give us a richer sense of a particular tradition’s literary history.”—Kasia Bartoszynska, Three Percent

“This translation, the skilful work of Anna Gąsienica Byrcyn and Stephanie Kraft, well renders the simple, unadorned language of the original Polish version, and the book comes in John Bukowczyk’s Polish and Polish-American Studies Series that is already well established and well-known for choosing manuscripts in terms of excellence. Marta will find its reader among lovers of literature as well as academics studying women writers and the literature of the second half of the nineteenth century. It will provide important reading material for courses in literature at the university level—not only those with a focus on women’s writing, but also those concerned with ‘the other Europe’ and its women."—Bożena Karwowska, Polish Review