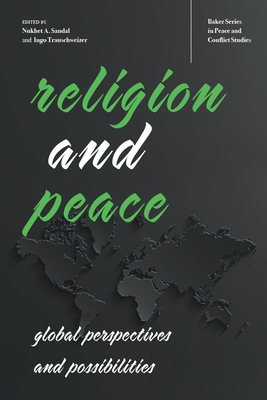 Can religion help societies achieve peace and stability? What actions can religious leaders take to facilitate conflict resolution? This book addresses these critical questions in terms of numerous contemporary conflicts within and between countries.

In the aftermath of the 9/11 attacks, public attention to religion shifted away from its relationship to politics and toward its connection to violence in civil conflicts, wars, and terrorism. Religion’s role in sowing discord became more prominent than its ability to unify. Only recently have discussions turned toward the positive impact of religion and spirituality in the public sphere and to the role of faith in resolving diplomatic, political, and social problems. The essays in this book contribute to this discourse by examining past, present, and future opportunities to promote peace through religion and spirituality.

The contributors to this volume explore topics such as humanitarianism, philosophy, counterextremism, human rights, rituals, populism, foreign policy, and environmentalism. Some of the chapters approach these topics from a transnational perspective, while others focus on specific countries in Africa, Asia, Europe, Latin America, and the Middle East.

Nukhet A. Sandal is an associate professor of political science at Ohio University. She is the author of Religious Leaders and Conflict Transformation: Northern Ireland and Beyond and the coauthor of Religion and International Relations Theory: Interactions and Possibilities.

Ingo Trauschweizer is a professor of history and former director of the Contemporary History Institute at Ohio University, where he teaches courses on American and global military history, the Cold War, and the Vietnam War. His books include The Cold War U.S. Army: Building Deterrence for Limited War and Maxwell Taylor’s Cold War: From Berlin to Vietnam.

“This volume presents an original and erudite analysis of the influence of religious transnational actors, ideas, organizations on conflict resolution and peace. It pushes the boundaries of the field…. It is a must read for students of international relations and conflict resolution.”—Jocelyne Cesari, author of We God's People: Christianity, Islam, and Hinduism in the World of Nations

“[This] volume is what the areas of religion and peace needs most: a careful, honest, social scientific treatment that confronts ignorance and romanticization. The authors instead ask the hard and essential questions—when religious actors promote peace (and justice, and human rights) best, and when they are coopted, politicized, or steered awry by policies such as those of the U.S. government—and answer them through cases drawn from around the world and in settings where analysts are not accustomed to looking. The result is a well-integrated volume that makes the case for religion’s capacity to increase peace and justice precisely by subjecting this effort to close, sober scrutiny.”—Daniel Philpott, author of Just and Unjust Peace: An Ethic of Political Reconciliation

“Religion and Peace masterfully moves the conversation beyond the ‘religion can be good or bad’ paradigm that has run its course in theory as well as practice. The chapters highlight the enduring relevance of the legacies of colonialism on contemporary praxis of peace and justice' the need to engage dialogically and relationally in imagining religious and political ethics; the persistence of secularist and modernist assumptions in analytic approaches to understanding the relations between religion and exclusionary populisms; religion and governance in the African postcolonies; liberationist, autocratic, and strategic deployment of religiosity in maneuvering complex political terrains in the MENA region; the failure of religious leaders to deescalate violence produced in moments of national martyrs’ death and burial during The Troubles in Northern Ireland; the misguided scaffolding of the post 9.11 security discourse; religiously literate foreign-policy making; the intersections of indigeneity and humanitarianism; and many other fruitful and thought provoking sites of interrogation. The volume offers generative and fresh insights at a critical moment of reassessment of the religion and peace field upon its often-siloed pathways.”—Atalia Omer, author of When Peace Is Not Enough: How the Israeli Peace Camp Thinks about Religion, Nationalism, and Justice

"Combining perspectives from the humanities and social sciences, this volume offers a series of informed studies on religion, peace, and violence. From indigenous religions and peacebuilding to the perils of CVE programming in West Africa; from the Janus-faced nature of collectivist European Christianities to the roller coaster of U.S. foreign religion policy, contributors dive in to current debates with gusto, bringing their expertise to bear in the ongoing debate over what we mean when we say ‘religion,’ and what it entails for public life.”—Elizabeth Shakman Hurd, author of Beyond Religious Freedom: The New Global Politics of Religion and coeditor of At Home and Abroad: The Politics of American Religion

“Given the diverse international contexts covered in this volume, generalists as well as regional specialists will find this work important and compelling. Religion is increasingly seen as an important factor in peace studies, so scholars and students in this discipline will be interested. Those in religious studies will also find this a fascinating read and an important reference for their research.”—Timothy J. White, editor of Theories of International Relations and Northern Ireland