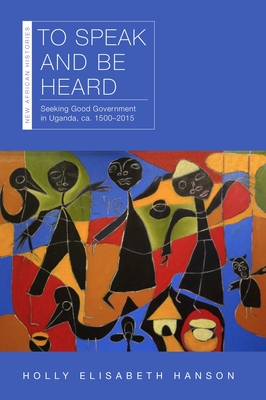 A history of a political practice through which East Africans have sought to create calm, harmonious polities for five hundred years.

“To speak and be heard” is a uniquely Ugandan approach to government that aligns power with groups of people that actively demonstrate their assent both through their physical presence and through essential gifts of goods and labor. In contrast to a parliamentary democracy, the Ugandan system requires a level of active engagement much higher than simply casting a vote in periodic elections.

These political strategies—assembly, assent, and powerful gifts—can be traced from before the emergence of kingship in East Africa (ca. 1500) through enslavement, colonial intervention, and anticolonial protest. They appear in the violence of the Idi Amin years and are present, sometimes in dysfunctional ways, in postcolonial politics. Ugandans insisted on the necessity of multiple voices contributing to and affirming authority, and citizens continued to believe in those principles even when colonial interference made good governance through building relationships almost impossible.

Through meticulous research, Holly Hanson tells a history of the region that differs from commonly accepted views. In contrast to the well-established perception that colonial manipulation of Uganda’s tribes made state failure inevitable, Hanson argues that postcolonial Ugandans had the capacity to launch a united, functional nation-state and could have done so if leaders in Buganda, Britain, and Uganda’s first governments had made different choices.

Holly Elisabeth Hanson is professor emerita of history at Mount Holyoke College, where she taught African history for more than two decades. She is currently the coordinator of the research department of the Baha'i World Center in Haifa, Israel. She is the author of Landed Obligation: The Practice of Power in Buganda, numerous journal essays, and several books on community-based social change.

“In this thought-provoking new book Holly Hanson has cut clean through the conventional but hated three-part periodization of African historiography—pre-colonial, colonial, and postcolonial—with its equally unhelpful oppositions of tradition and modernity. With persuasive evidence she shows that Ugandans have for centuries sought consultative, accountable governance, often with institutional checks on the caprice of kings, governors, or presidents. They have long spoken up in public in the conviction that loyalty from below deserves attention from above, and now hope that premodern strategies to secure good governance will help to conjure up a better modernity.”—John Lonsdale, coauthor of Unhappy Valley: Conflict in Kenya and Africa

“This book ‘speaks loudly’ in the hope that it will ‘be heard.’ Holly Hanson successfully demonstrates how in pursuit of a just and moral polity, physical and conceptual spaces created out of people’s presence and actions provided an opportunity through which people can speak to the powerful and expect to be heard. To Speak and be Heard is a prototype of how a blended study of overt ‘spaces’ and ‘speaking’ can reveal larger political engagement and accountability trends in a complex and rapidly changing world. It superbly demonstrates how those trends could be encapsulated and discerningly written about in the twenty-first century.”—Nakanyike B. Musisi, University of Toronto, coauthor of Decentralisation and Transformation of Governance in Uganda

“Holly Hanson weaves into her account of good government a history of inequality, revealing the kind of thing that can make the formula for direct democracy fail to produce the desired results and atrophy. The next challenge is to speak up, be heard, and figure out the obligations that will diminish inequality. Crossing all major periods in Ugandan history, but focused on the last century and a half, this is a landmark book in African history.”—David L. Schoenbrun, author of The Names of the Python: Belonging in East Africa, 900 to 1930

“Holly Hanson’s survey has unearthed massive evidence to show that autocracy, one person rule and tyranny did not define African precolonial systems, much as western visitors focused on it or as current media depicts African systems of governance. [Hanson] proves that there were defined mechanisms for the expression … of alternative views of managing society. These views were implemented because there were ample spaces for people to speak and be heard.”—A.B.K. Kasozi, author of The Social Origins of Violence in Uganda, 1964–1985