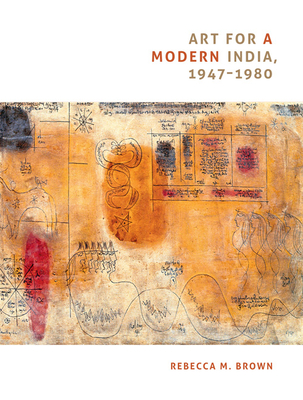 
Not On Our Shelves—Ships in 1-5 Days
Following India's independence in 1947, Indian artists creating modern works of art sought to maintain a local idiom, an "Indianness" representative of their newly independent nation, while connecting to modernism, an aesthetic then understood as both universal and presumptively Western. These artists depicted India's precolonial past while embracing aspects of modernism's pursuit of the new, and they challenged the West's dismissal of non-Western places and cultures as sources of primitivist imagery but not of modernist artworks. In Art for a Modern India, Rebecca M. Brown explores the emergence of a self-conscious Indian modernism-in painting, drawing, sculpture, architecture, film, and photography-in the years between independence and 1980, by which time the Indian art scene had changed significantly and postcolonial discourse had begun to complicate mid-century ideas of nationalism.

Through close analyses of specific objects of art and design, Brown describes how Indian artists engaged with questions of authenticity, iconicity, narrative, urbanization, and science and technology. She explains how the filmmaker Satyajit Ray presented the rural Indian village as a socially complex space rather than as the idealized site of "authentic India" in his acclaimed Apu Trilogy, how the painter Bhupen Khakhar reworked Indian folk idioms and borrowed iconic images from calendar prints in his paintings of urban dwellers, and how Indian architects developed a revivalist style of bold architectural gestures anchored in India's past as they planned the Ashok Hotel and the Vigyan Bhavan Conference Center, both in New Delhi. Discussing these and other works of art and design, Brown chronicles the mid-twentieth-century trajectory of India's modern visual culture.