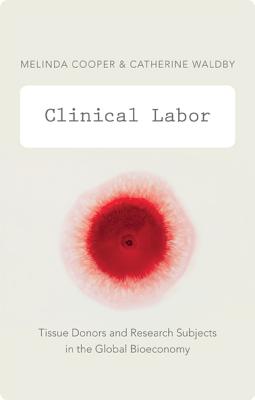 
Not On Our Shelves—Ships in 1-5 Days
Forms of embodied labor, such as surrogacy and participation in clinical trials, are central to biomedical innovation, but they are rarely considered as labor. Melinda Cooper and Catherine Waldby take on that project, analyzing what they call "clinical labor," and asking what such an analysis might indicate about the organization of the bioeconomy and the broader organization of labor and value today. At the same time, they reflect on the challenges that clinical labor might pose to some of the founding assumptions of classical, Marxist, and post-Fordist theories of labor. Cooper and Waldby examine the rapidly expanding transnational labor markets surrounding assisted reproduction and experimental drug trials. As they discuss, the pharmaceutical industry demands ever greater numbers of trial subjects to meet its innovation imperatives. The assisted reproductive market grows as more and more households look to third-party providers for fertility services and sectors of the biomedical industry seek reproductive tissues rich in stem cells. Cooper and Waldby trace the historical conditions, political economy, and contemporary trajectory of clinical labor. Ultimately, they reveal clinical labor to be emblematic of labor in twenty-first-century neoliberal economies.