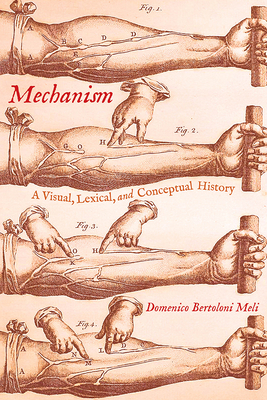 
Special Order—Subject to Availability
The mechanical philosophy first emerged as a leading player on the intellectual scene in the early modern period—seeking to explain all natural phenomena through the physics of matter and motion—and the term mechanism was coined. Over time, natural phenomena came to be understood through machine analogies and explanations and the very word mechanism, a suggestive and ambiguous expression, took on a host of different meanings. Emphasizing the important role of key ancient and early modern protagonists, from Galen to Robert Boyle, this book offers a historical investigation of the term mechanism from the late Renaissance to the end of the seventeenth century, at a time when it was used rather frequently in complex debates about the nature of the notion of the soul. In this rich and detailed study, Domenico Bertoloni Meli focuses on strategies for discussing the notion of mechanism in historically sensitive ways; the relation between mechanism, visual representation, and anatomy; the usage and meaning of the term in early modern times; and Marcello Malpighi and the problems of fecundation and generation, among the most challenging topics to investigate from a mechanistic standpoint.

Domenico Bertoloni Meli is provost professor in history and philosophy of science and medicine at Indiana University, Bloomington. He has received several fellowships and awards, including a Wellcome Fellowship at Cambridge University, a Dibner Fellowship at MIT, a membership at the Institute for Advanced Study, Princeton, and a John Simon Guggenheim Fellowship.

“This is an innovative book. Drawing on a profound knowledge of Marcello Malpighi and his intellectual milieu, as well as expertise in the study of the early modern life sciences more generally, Bertoloni Meli has genuinely complemented the recent literature on early modern mechanism and mechanical philosophy. An added bonus is his focus on visual representation, a rich seam that renders the book accessible to a wider readership than a pure philosophical or historical study.” —Peter Anstey, University of Sydney


“We have not been clear about the various ways in which early modern figures thought about mechanism, and in absence of such clarity, our philosophical and historical work has been less rich and accurate than it might otherwise be. This book takes an important step in correcting the problem. Bertoloni Meli also does a wonderful job of synthesizing the material on mechanism with developments in the life sciences of the early modern period, another topic of intensive current scholarly interest.” —Karen Detlefsen, University of Pennsylvania


"The book's excellent graphics are scattered throughout the text. . . . These provide the reader with a clear understanding of the complexity and diverse ways the notion of mechanisms became a crucial part of understanding the early modern world." —Choice

“An interesting and original contribution. Bertoloni Meli’s book is well worth reading for its rich references and for the author's elegant writing.” —Metascience


“With great clarity, Bertoloni Meli presents us with a wealth of material on an intricate subject. His book complements recent scholarship, corrects erroneous interpretations, adds important reflections on the evolution of mechanical thinking, and thereby makes an outstanding contribution to early modern studies. His study may be acclaimed as a seminal text for our understanding of the mechanization of nature and of natural bodies in the seventeenth century and beyond.” —Early Science and Medicine


“Bertoloni Meli is an acknowledged maestro in this area of study. His crisp argument, unfolding via examples, case studies, textual or graphical analyses, and historiographical reflections, is aided by the extensive notes and bibliography . . . which can guide the interested reader’s follow-up on particular issues. . . . This erudite and energizing book redefines the problematic of early modern ‘mechanism.’” —Isis