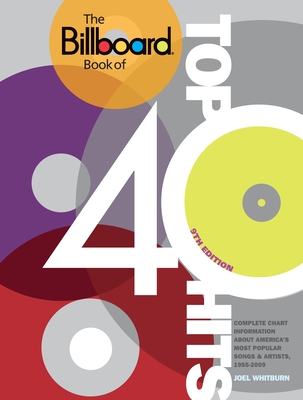 Beginning with Bill Haley & His Comets’ seminal “Rock Around the Clock” all the way up to Lady Gaga and her glammed-out “Poker face,” this updated and unparalleled resource contains the most complete chart information on every artist and song to hit Billboard’s Top 40 pop singles chart all the way back to 1955. Inside, you’ll find all of the biggest-selling, most-played hits for the past six decades. Each alphabetized artist entry includes biographical info, the date their single reached the Top 40, the song’s highest position, and the number of weeks on the charts, as well as the original record label and catalog number. Other sections—such as “Record Holders,” “Top Artists by Decade,” and “#1 Singles 1955-2009”—make The Billboard Book of Top 40 Hits the handiest and most indispensable music reference for record collectors, trivia enthusiasts, industry professionals and pop music fans alike.

• Beyoncé’s 2003 hit “Crazy in Love” spent 24 weeks in the Top 40 and eight of them in the #1 spot.
• Billy Idol has had a total of nine Top 40 hits over his career, the last being “Cradle of Love” in 1990.
• Of Madonna’s twelve #1 hits, her 1994 single “Take a Bow” held the spot the longest, for seven weeks—one week longer than her 1984 smash “Like a Virgin.”
• Marvin Gaye’s song “Sexual Healing” spent 15 weeks at #3 in 1982, while the same song was #1 on the R&B chart for 10 weeks.
• Male vocal group Boyz II Men had three of the biggest chart hits of all time during the 1990s.
• The Grateful Dead finally enjoyed a Top 10 single in 1987 after 20 years of touring.
• Janet Jackson has scored an impressive 39 Top 40 hits—one more than her megastar brother Michael!
JOEL WHITBURN, widely recognized as the foremost authority on charted music, has published more than 100 books based on Billboard charts both for the trade market and for his own mail-order company, Record Research, based in Menomonee Falls, Wisconsin. Record Research began as a hobby and is now a liscensee of Billboard magazine. Joel's other Billboard Books titles include The Billboard Book of Top 40 Country Hits and The Billboard Book of Top 40 R&B and Hip-Hop Hits.