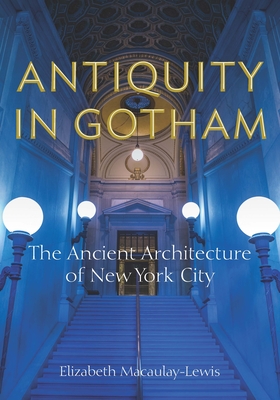 Since the city's inception, New Yorkers have deliberately and purposefully engaged with ancient architecture to design and erect many of its most iconic buildings and monuments, including Grand Central Terminal and the Soldiers' and Sailors' Memorial Arch in Brooklyn, as well as forgotten gems such as Snug Harbor on Staten Island and the Gould Memorial Library in the Bronx. Antiquity in Gotham interprets the various ways ancient architecture was re-conceived in New York City from the eighteenth century to the early twenty-first century. Contextualizing New York's Neo-Antique architecture within larger American architectural trends, author Elizabeth Macaulay-Lewis applies an archaeological lens to the study of the New York buildings that incorporated these various models in their design, bringing together these diverse sources of inspiration into a single continuum. Antiquity in Gotham explores how ancient architecture communicated the political ideals of the new republic through the adaptation of Greek and Roman architecture, how Egyptian temples conveyed the city's new technological achievements, and how the ancient Near East served many artistic masters, decorating the interiors of glitzy Gilded Age restaurants and the tops of skyscrapers. Rather than classifying neo-classical (and Greek Revival), Egyptianizing, and architecture inspired by the ancient Near East into distinct categories, Macaulay-Lewis applies the Neo-Antique framework that considers the similarities and differences--intellectually, conceptually, and chronologically--among the reception of these different architectural traditions. This fundamentally interdisciplinary project draws upon all available evidence and archival materials--such as the letters and memos of architects and their patrons, and the commentary in contemporary newspapers and magazines--to provide a lively multi-dimensional analysis that examines not only the city's ancient buildings and rooms themselves but also how New Yorkers envisaged them, lived in them, talked about them, and reacted to them. Antiquity offered New Yorkers architecture with flexible aesthetic, functional, cultural, and intellectual resonances--whether it be the democratic ideals of Periclean Athens, the technological might of Pharaonic Egypt, or the majesty of Imperial Rome. The result of these dialogues with ancient architectural forms was the creation of innovative architecture that has defined New York City's skyline throughout its history.
Elizabeth Macaulay-Lewis is Associate Professor of Liberal Studies and Middle Eastern Studies. She is also the Executive Officer of the MA Program in Liberal Studies at The Graduate Center, The City University of New York.