Frog and Ball (I Like to Read Comics) (Hardcover) 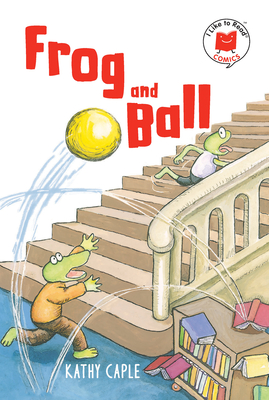 Frog and Ball (I Like to Read Comics) (Hardcover)


Not On Our Shelves—Ships in 1-5 Days
A frog, a magic spell book, and one big, angry yellow ball. What could go wrong? Everything in this hilarious early reader comic.

Bee Bop Tiffle Dunk! Bam Bog Boo Bop! None of the magic spells in Frog's magic spell book will work on the deflated ball he found. Frustrated, Frog kicks the ball and watches as it flies up in the air and gets bigger and bigger and then as it comes back--uh, oh! Frog tries to outrun, trick, and hide from the ball in the library but the ball always finds him--even if it means knocking down bookshelves, ruining a puppet show, and sending papers flying everywhere!

Author-illustrator Kathy Caple has created a hilarious story for young readers filled with slapstick humor and a healthy dose of be careful what you wish for. With a variety of panel sizes and styles, there is much here for kids to pore over and return to again and again.

I Like to Read Comics are created for kids just learning to read. Sequential art and simple text--and a powerful relationship between the two--are perfect for developing readers.

A Junior Library Guild Gold Standard Selection
Kathy Caple's many books for children include Duck & Company, an American Booksellers Association Pick of the List, and A Night at the Zoo, an I Like to Read® book. She grew up in Longview, Washington, where she developed an early love of reading. Caple now lives in Cambridge, Massachusetts, where she works as a children's librarian.
★  "Never underestimate the chaotic fun that magic and an angry bouncing ball can create. . . .Caple’s tidy panels and pastel-hued cartoons make a surprisingly effective setting for the slapstick, which should have young readers giggling. Simple sentences—often just subject and verb—with lots of repetition propel the action. Frog’s nonsense-word spells ('Poof Wiffle, Bop Bip!') are both funny and excellent practice in phonetics. Fast and furious action guaranteed to keep new readers laughing and turning pages." —Kirkus Reviews, Starred Review

"An amusing book for beginning readers."—Booklist

"Anthropomorphized characters are at the center of this engaging, entertaining early reader. The comic format allows the action to play out visually, complementing the limited text. Caple’s artwork has a soft, animated quality that provides a comforting touch. . . . An amusing tale for beginning readers, in a comic style that will build reading skills while providing ample laughs."—School Library Journal