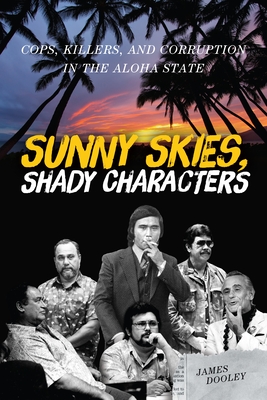 For thirty years starting in the mid-1970s, the byline of Jim Dooley appeared on riveting investigative stories of organized crime and political corruption that headlined the front page of Honolulu's morning daily. In Sunny Skies, Shady Characters, James Dooley revisits highlights of his career as a hard-hitting investigative reporter for the Honolulu Advertiser and, in later years, for KITV television and the online Hawaii Reporter. His lively backstories on how he chased these high-profile scandals make fascinating reading, while providing an insider's look at the business of journalism and the craft of investigative reporting.

Dooley's first assignment as an investigative journalist involved the city housing project of Kukui Plaza, which introduced him to the "pay to play" method of awarding government contracts to obliging consultants. In later stories, he scrutinized bloody struggles over illicit gambling revenue, the murder of a city prosecutor's son, local syndicate ties to the Teamsters Union, and the dealings of Bishop Estate. His groundbreaking coverage of the forays by yakuza into Hawaii and the continental United States were the first of its kind in American journalism. As Dooley pursued stories from the underside of island society, names of respected public figures and those of violent criminals filled his notebook: entertainer Don Ho, U.S. Senator Daniel Inouye, Governors George Ariyoshi and Ben Cayetano, Mayor Frank Fasi, and notorious felons Henry Huihui, Nappy Pulawa, and Ronnie Ching. Woven throughout is the name of Big Island rancher Larry Mehau--was he the "godfather of organized crime" in Hawaii as alleged by the FBI, or simply an ex-cop who befriended power brokers in the course of doing business for his security guard firm? The book includes a timeline of Mehau's activities to allow readers to judge for themselves.
Raised in San Francisco and the Bay Area, James Dooley worked as a United Press International reporter in Honolulu in 1973 and a year later joined the staff of the Honolulu Advertiser, where he was an investigative reporter for nearly two decades. After five years at Honolulu's KITV News, Dooley returned to the Advertiser in 2002 and moved to online reporting at Hawaii Reporter in 2010. He retired in 2012.