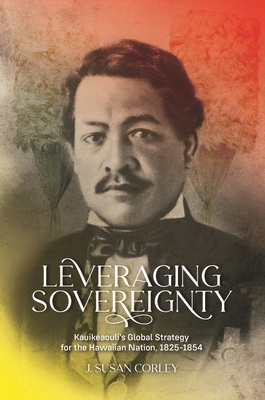 Leveraging Sovereignty: Kauikeaouli's Global Strategy for the Hawaiian Nation, 1825-1854 examines the leadership of Hawai'i's longest reigning monarch, King Kamehameha III. It highlights the early 1840s, when Kauikeaouli secured recognition from the United States, Britain, and France that he ruled over an independent and sovereign Hawaiian state. Britain and France, however, sought to limit his powers through forced extraterritorial treaties, and the king struggled to regain ruling control over key governance functions. At the same time, foreign merchants and traders increasingly dominated Hawai'i's economic activity, demanded institutional and social changes, and threatened to overwhelm the Hawaiian population already decimated by disease and out-migration.

Kauikeaouli quickly responded to threats to the monarchy's power with a comprehensive strategy to regain and maintain full functional control. In Leveraging Sovereignty, J. Susan Corley upends the popular narrative begun in Kauikeaouli's own lifetime that his white ministers ruled in his stead. Adding a new layer of understanding, Corley's meticulous research reveals insights into historical events and Kauikeaouli's reign. She supports her findings of the king's policies and tactical negotiations with an extensive use of Kamehameha III's own commands as recorded in kingdom archives, letters and documents from government records, and contemporary Hawaiian- and English-language newspaper accounts. While this book includes an overview of the kingdom's administrative structure in the 1840s, its analysis focuses on the origination, implementation, and effectiveness of key statecraft tactics. The king's carefully planned strategy relied on the acquisition of western ministerial skills and of an English-language newspaper (the Polynesian) to publicly defend his sovereign rights and privileges at home and abroad. He ensured the enactment of legislation to defeat foreigners' challenges by strengthening juridical processes and safeguarding land-title rights for Hawaiians, and he deftly managed the multistage renegotiation of unequal international treaties. By the end of his reign in 1854, Kamehameha III had succeeded: The king had reclaimed unrestricted power and authority over all governance areas of the independent, sovereign Hawaiian state. He delivered to his successor Kamehameha IV a restructured, constitutional state whose sovereign status was protected by the three maritime powers of that time.
J. Susan Corley is an independent scholar with a PhD in history from the University of Hawaiʻi at Mānoa.