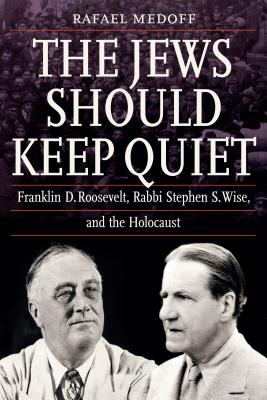 
Not On Our Shelves—Ships in 1-5 Days
Based on recently discovered documents, The Jews Should Keep Quiet reassesses the hows and whys behind the Franklin D. Roosevelt administration’s fateful policies during the Holocaust. Rafael Medoff delves into difficult truths: With FDR’s consent, the administration deliberately suppressed European immigration far below the limits set by U.S. law. His administration also refused to admit Jewish refugees to the U.S. Virgin Islands, dismissed proposals to use empty Liberty ships returning from Europe to carry refugees, and rejected pleas to drop bombs on the railways leading to Auschwitz, even while American planes were bombing targets only a few miles away—actions that would not have conflicted with the larger goal of winning the war.

What motivated FDR? Medoff explores the sensitive question of the president’s private sentiments toward Jews. Unmasking strong parallels between Roosevelt’s statements regarding Jews and Asians, he connects the administration’s policies of excluding Jewish refugees and interning Japanese Americans.

The Jews Should Keep Quiet further reveals how FDR’s personal relationship with Rabbi Stephen S. Wise, American Jewry’s foremost leader in the 1930s and 1940s, swayed the U.S. response to the Holocaust. Documenting how Roosevelt and others pressured Wise to stifle American Jewish criticism of FDR’s policies, Medoff chronicles how and why the American Jewish community largely fell in line with Wise. Ultimately Medoff weighs the administration’s realistic options for rescue action, which, if taken, would have saved many lives.

Rafael Medoff is founding director of the David S. Wyman Institute for Holocaust Studies and coeditor of the institute’s online Encyclopedia of America’s Response to the Holocaust. He has taught history at Ohio State University, the State University of New York at Purchase, and elsewhere, and has written nineteen books about American Jewish history, the Holocaust, and related topics, including Too Little, and Almost Too Late: The War Refugee Board and America’s Response to the Holocaust.
"Judicious and nuanced."—Drew Darien, Journal of American History

"Meticulously documented . . . sober . . . an important contribution to our understanding of the American government's response to the Holocaust, and that of Franklin D. Roosevelt at the helm of power."—American Historical Review

"The Jews Should Keep Quiet is the culmination of more than three decades of research, and it is devastating. Few readers will come away from Rafael Medoff ’s book without their view of FDR having been signicantly changed."—David G. Dalin, Jewish Review of Books

"Readers with an interest in World War II, 20th-century political history, Jewish history, and the Holocaust should find this an incisive and insightful exploration of the leading figures of this period."—Library Journal, starred review

"With meticulous detail, Medoff documents the entwined failures of an indifferent president and a sycophantic Jewish leader."—Jerold Auerbach, Algemeiner

"This sad chapter in the history of American Jewry should serve as a keen example to all in today's Jewish community that we cannot assume that liberal, left-wing ideology is inherently pro-Jewish."—Alan Jay Gerber, Jewish Star

"The Jews Should Keep Quiet is a historical accounting of lies, deceptions and subterfuge promulgated by Roosevelt and his administration on American Jews and their leaders together with the struggles of Wise, as a recognized Jewish leader, and the American Jewish community against the tide of growing anti-Semitism and a racially-biased president. Medoff, as a first-rate historian of the Holocaust, clearly communicates what my poorly educated immigrant grandmother instinctively recognized, 'Roosevelt was a great president, except for the Jews.'"—Fred Reiss, San Diego Jewish World

"Rafael Medoff . . . has come closer than anyone before him to explaining the inexplicable. He does so in a new book titled, The Jews Should Keep Quiet: Franklin D. Roosevelt, Rabbi Stephen S. Wise, and the Holocaust."—Sol Stern, Tablet Magazine