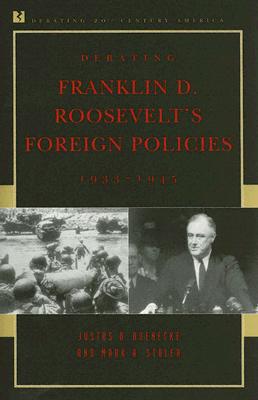 
Not On Our Shelves—Ships in 1-5 Days
Elected an unprecedented four times to the presidency, Franklin D. Roosevelt led the United States through some of the most dramatic and trying foreign and domestic episodes in its history. Coming to power in the throws of a crippling depression, Roosevelt quickly found himself having to juggle the need for tremendous domestic revitalization in a world menaced by burgeoning aggressor states. In Debating Franklin D. Roosevelt's Foreign Policies, noted historians Justus D. Doenecke and Mark A. Stoler offer differing perspectives on the Roosevelt years, finding disparate meanings from common data. Finding Roosevelt astute at choosing the most effective option of those available, Stoler generally defends FDR's policies against their traditional critics. Conversely, Doenecke emphasizes a dangerous shallowness and superficiality in FDR's approach to foreign affairs, particularly in his first two terms. The contrary viewpoints of the authors, supplemented by carefully chosen documents, provide an ideal introduction allowing readers to examine the issues and draw their own conclusions about Franklin Roosevelt's foreign policy.
Justus D. Doenecke is professor of history at the New College of Florida. Mark A. Stoler is professor of history at the University of Vermont.