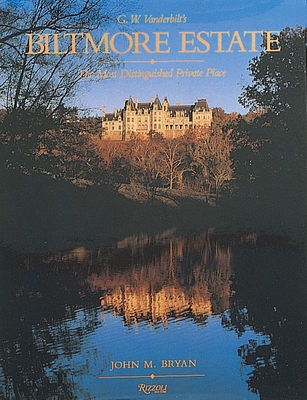 
Special Order—Subject to Availability
"The most distinguished private place" - that is how, in 1893, the great landscape architect Frederick Law Olmsted described Biltmore Estate, perhaps the most ambitious private building project of America's Gilded Age. It was only five years earlier that George Washington Vanderbilt purchased the first parcel of what would become his 125,000-acre estate in Asheville, North Carolina. Along with Olmsted, he commissioned the preeminent architect of the day, Richard Morris Hunt, to design the estate. The house, modeled in part on the chateaux of the Loire Valley, has become one of the greatest and most important in American architectural history. Its 255 rooms, with spectacular and finely crafted interiors, opulent furnishings (some designed by Hunt), and furniture and decorative arts objects collected by Vanderbilt from all corners of the world, have made it a rich national treasure. The estate served as the cradle of the profession of forestry in America. With Olmsted's advice and expertise, it became the first working model of a scientifically managed forest and played a critical role in the creation of our national parks. This meticulously researched book accompanies an exhibition organized by The Octagon, the Museum of the American Architectural Foundation; it chronicles Biltmore from inception, development, and construction through its Christmas 1895 opening celebrations, and into the present. Original architectural drawings, sketches, plans, presentation drawings, nineteenth-century photographs, and vibrant new color photography complete this portrait of a great landmark. Today Biltmore Estate belongs to George Washington Vanderbilt's descendants, who have opened the house to the public and have made it one of the most visited in America.
John Bryan is a former professor of art and architectural history at the University of South Carolina. He is the author of Creating the South Carolina State House and Biltmore Estate: The Most Distinguished Private Place.