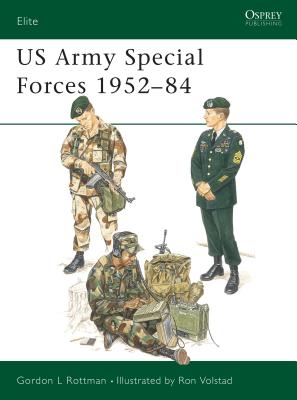 This is book number 4 in the Elite series.

From its very inception the United States Army Special Forces has been enmeshed in controversy, its mission misunderstood to varying degrees, and its very existence opposed by some of the Army hierarchy. Nevertheless it continues to serve in a highly specialised role in all manner of differing conditions. There can be few better qualified to chronicle the history of this unique organisation than former Special Forces Group weapons specialist Gordon Rottman, whose expert knowledge is clearly evident in this authoritative text. This volume also contains 12 full page colour plates by one of the world's most respected military artists, Ron Volstad.
Gordon L. Rottman entered the US Army in 1967, volunteered for Special Forces and completed training as a weapons specialist. He served in the 5th Special Forces Group in Vietnam in 1969–70 and subsequently in airborne infantry, long-range patrol and intelligence assignments until retiring after 26 years. He was a Special Operations Forces scenario writer at the Joint Readiness Training Center for 12 years and is now a freelance writer, living in Texas.