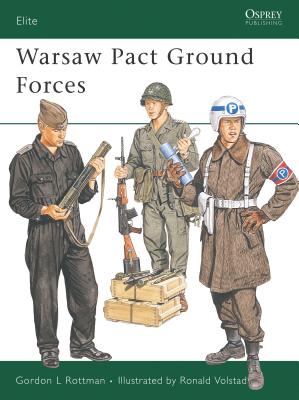 This is book number 10 in the Elite series.

Osprey's study of the ground forces of the Cold War (1946-1991). While much has been published on the armed forces of the USSR during the 1980s, surprisingly little is available on the forces supplied by the other member nations of the Warsaw Pact. Rivalling the size of the United States Army, the combined ground forces of the six non-Soviet Warsaw Pact countries totalled over 775,000 active troops, with almost two million ground forces reserves. This book examines the history, organization and uniforms of the often overlooked DDR, Czechoslovak, Polish, Bulgarian, Hungarian and Romanian forces at the end of the Cold War.
Gordon L. Rottman entered the US Army in 1967, volunteered for Special Forces and completed training as a weapons specialist. He served in the 5th Special Forces Group in Vietnam in 1969–70 and subsequently in airborne infantry, long-range patrol and intelligence assignments until retiring after 26 years. He was a Special Operations Forces scenario writer at the Joint Readiness Training Center for 12 years and is now a freelance writer, living in Texas.