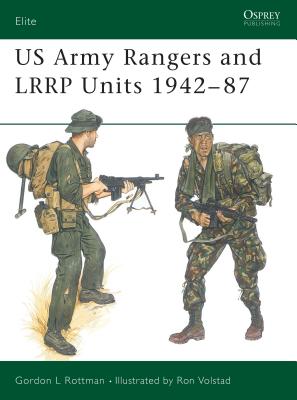 This is book number 13 in the Elite series.

Ranger - the very word conjures up visions of small, highly trained units executing lightning-fast raids on an unexpecting enemy. It is also synonymous with high esprit de corps and excellence at arms. The US Army Rangers provide units of well-disciplined soldiers who possess the knowledge and courage to operate on their own, deep behind enemy lines. Gordon L. Rottman explores the history of these unique troops, starting with the original 'Rogers' Rangers' company of 1756, whose daring operations and deep penetrations of enemy-held country laid down the pattern for all subsequent Ranger units to follow.
Gordon L. Rottman entered the US Army in 1967, volunteered for Special Forces and completed training as a weapons specialist. He served in the 5th Special Forces Group in Vietnam in 1969–70 and subsequently in airborne infantry, long-range patrol and intelligence assignments until retiring after 26 years. He was a Special Operations Forces scenario writer at the Joint Readiness Training Center for 12 years and is now a freelance writer, living in Texas.