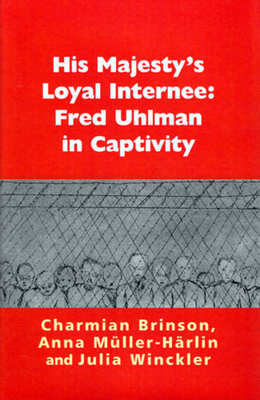 
Special Order—Subject to Availability
In May and June 1940, when the war seemed to be going badly for Britain, thousands of German and Austrian refugees from Nazi oppression were rounded up and put into internment camps on the Isle of Man and elsewhere. Fred Uhlman, a Jewish refugee from Stuttgart, a lawyer and an artist, was one of them. Uhlman, who was deeply affected by the experience, set out to record it in word and image. This volume reproduces his original internment diary from 1940 alongside another version of the same text from 1979, compiled retrospectively. These texts are complemented by sixteen haunting drawings and linocuts that Uhlman produced during internment. The volume also contains the letters, highly moving personal documents, exchanged to and from the internment camp between Uhlman and his wife Diana; correspondence between Uhlman and his disapproving aristocratic father-in-law Lord Croft; and documents from the daily life of Hutchinson Camp, Douglas, Isle of Man, where Uhlman was held for seven months. Chapters on Uhlman's biography and on his artistic and literary output set his writings and drawings within the wider context of his life and work. In addition, a chapter outlining the internment crisis of 1940 also sets out to recreate the extraordinary cultural and intellectual life that the internees managed to make for themselves in Hutchinson Camp, in particular the activities of the sizeable group of artists, such as Kurt Schwitters, who happened to find themselves there.