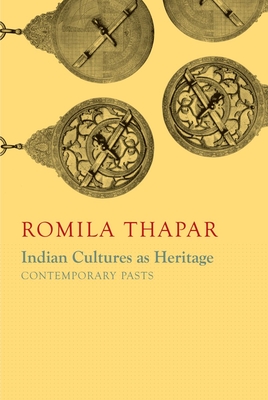 
Not On Our Shelves—Ships in 1-5 Days
One of India’s preeminent historians examines the role of history in contemporary society.

Every society has its cultures: patterns of how people live and express themselves and how they value objects and thoughts. Recently, there has been considerable debate about what constitutes Indian culture and heritage and about how much diversity those categories ought to contain. Romila Thapar begins by explaining how definitions of culture have changed over the past three centuries. She suggests that cultures can be defined as a shared understanding of selected objects and thoughts from the past, but this understanding is often stripped of its historical context. Thapar touches on a few of these illuminating contexts, such as social discrimination, the role of women, and attitudes toward science and knowledge. This thought-provoking book is sure to spark productive debate about some current shibboleths in India’s culture.
Romila Thapar is an emeritus professor of history at the Jawaharlal Nehru University, New Delhi, and she was previously general president of the Indian History Congress. She is a fellow of the British Academy and holds honorary doctorates from Universities of Calcutta, Oxford University and the University of Chicago, among others. She is an Honorary Fellow of Lady Margaret Hall, Oxford, and SOAS, London. In 2008, she was awarded the prestigious Kluge Prize from the Library of Congress.