The Flight of the Garuda: The Dzogchen Tradition of Tibetan Buddhism (Paperback) 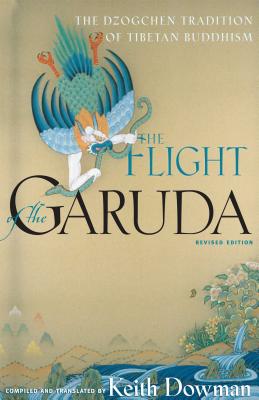 The Flight of the Garuda: The Dzogchen Tradition of Tibetan Buddhism (Paperback)

By Keith Dowman (Translated by)


Special Order—Subject to Availability
Dzogchen, a tradition of the Nyingma school of Tibetan Buddhism, is considered by many to be an extremely powerful path to enlightenment. This ground-breaking book offers translations of four sacred texts of the Dzogchen tradition: Secret Instruction in a Garland of Vision, The Flight of the Garuda, Emptying the Depths of Hell, and the Wish-Granting Prayer of Kuntu Zangpo. With an informative introduction by the translator, Flight of the Garuda is an invaluable resource for both practice and scholarship.

Flight of the Garuda conveys the heart advice of one of the most beloved nonsectarian masters of Tibet. Ordained as a Gelug monk, the itinerant yogi Shabkar was renowned for his teachings on Dzogchen, the heart practice of the Nyingma lineage. He wandered the countryside of Tibet and Nepal, turning many minds toward the Dharma through his ability to communicate the essence of the teachings in a poetic and crystal-clear way. Buddhists of all stripes, including practitioners of Zen and Vipassana, will find ample sustenance within the pages of this book, and be thrilled by the lyrical insights conveyed in Shabkar's words.

Along with the song by Shabkar, translator Keith Dowman includes several other seminal Dzogchen texts. Dzogchen practice brings us into direct communion with the subtlemost nature of our experience, the unity of samsara in nirvana as experienced within our own consciousness. Within the Nyingma school, it is held higher than even the practices of tantra for bringing the meditator face to face with the nature of reality.
Keith Dowman has been involved in the arena of Buddhism for more than forty years, living and raising a family in India and Nepal and in Tibetan refugee society. He received lay ordination in the Nyingma school of Tibetan Buddhism and is the author of more than a dozen books on Tibet and Tibetan Buddhism, including Flight of the Garuda, Sky Dancer, and Original Perfection.
"This soaring translation of Shabkar Rinpoche's venerated Dzogchen teachings is in good hands with Kieth Dowman. I heartily recommend it to students of this path and to anyone interested in Buddhist songs and spiritual enlightenment."
— Lama Surya Das, author of Awakening the Buddha Within

"An interesting and in-depth introduction...integrating Tibetan practice with contemporary Western life."
— The Beacon