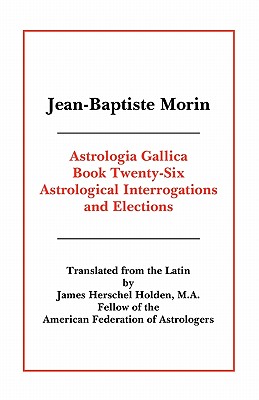 
Not On Our Shelves—Ships in 1-5 Days
(This book cannot be returned.)
This book is an English translation of Book 26 of the Astrologia Gallica, in which Morin discusses Interrogations (Horary Astrology) and Elections. He first criticizes the validity and use of Interrogations and then explains his method of making Elections with several examples. He insists that Elections must be made in conformity with the Natal Horoscope, its Primary Directions, Solar and Lunar Returns and their Primary Directions, and concordant Transits. And he includes a chapter setting forth general instructions for making Elections. Morin was a physician who became the most renowned of all French astrologers. He was appointed Royal Mathematician to King Louis XIII and was summoned to be present at the birth of the royal heir, the future King Louis XIV. James Herschel Holden, the translator, is Research Director of the American Federation of Astrologers and has been especially interested in the history of astrology.