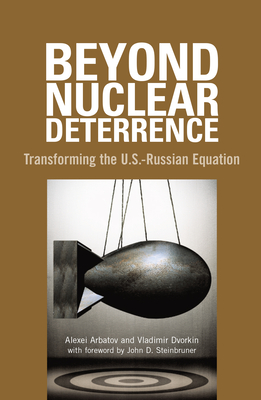 For nearly fifty years, including the decade and a half since the end of the Cold War, deterrence has remained the central nuclear arms control policy between the United States, Russia, and other principal nuclear powers. The question today is: Has the concept of deterrence outlived its usefulness? In Beyond Nuclear Deterrence, two of Russia's top nonproliferation and international security experts, Alexei Arbatov and Vladimir Dvorkin, critically assess the history of deterrence as it emerged between the Soviet Union and the U.S. and evolved through the Cold War to include an expanding nuclear club. The authors argue that while deterrence as a concept has always been paradoxical, it is poorly equipped to handle today's most significant nuclear challenges: proliferation and terrorism. Nuclear arms control must move beyond the deadlock of deterrence. The U.S. and Russia need to take the first bilateral steps to remove mutual nuclear deterrence as the foundation of their strategic relationship and implement changes that can be exported internationally.