Here on Lake Hallie: In Praise of Barflies, Fix-It Guys, and Other Folks in Our Hometown (Paperback) 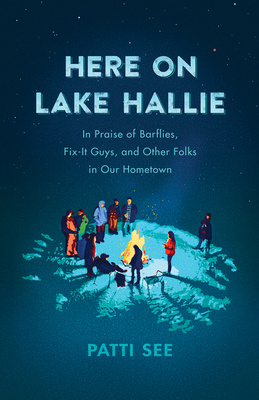 Here on Lake Hallie: In Praise of Barflies, Fix-It Guys, and Other Folks in Our Hometown (Paperback)


Not On Our Shelves—Ships in 1-5 Days
In these humorous and heartfelt essays, Patti See celebrates small-town life in Wisconsin’s Chippewa Valley. Featuring childhood memories of supper clubs, thrift sales, and cribbage games, as well as the midlife concerns that accompany having a son in the military, a parent with Alzheimer’s, and a private onsite septic system, See’s writing praises the quirky charm of her hometown and its people.

Growing up in the 1970s and 1980s as the youngest of eight children, Patti never imagined she’d stay in Chippewa Falls as an adult. Now, living on rural Lake Hallie just five miles from her childhood home, she has a new appreciation for all that comes with country living, from ice fishing and eagle sightings to pontoon rides and tavern dice. These brief essays—many of which were originally published in the Sawdust Stories column of the Eau Claire Leader-Telegram—establish that, above all else, it’s friends, family, and other folks in our hometown who provide us with a sense of belonging.
Patti See’s work has appeared in Salon Magazine, The Southwest Review, Brevity, Wisconsin People & Ideas, and Volume One Magazine, among many other publications, and she has been a regular contributor to Wisconsin Life on Wisconsin Public Radio.