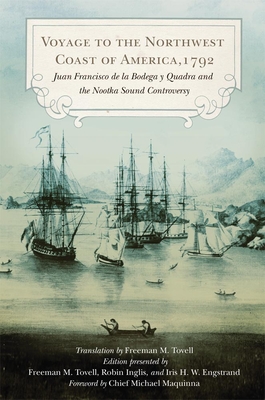 
Special Order—Subject to Availability
In 1792, Spanish naval officer and explorer Juan Francisco de la Bodega y Quadra sailed from San Blas, Mexico, to Nootka Sound, on the west coast of present-day Vancouver Island. For nearly three years, he had been immersed in the aftermath of the Nootka Crisis of 1789, a dispute between Britain and Spain over sovereignty in the North Pacific. He was journeying north as his government's commissioner to hand over Spanish-occupied territory at Nootka. This book offers the first published English translation of Bodega's journal, a remarkable account of his travels along the Northwest Coast of America, encounters with Native peoples--most notably, Chief Maquinna--and the friendship that developed between Bodega and his British counterpart, George Vancouver. Until now, Bodega's journal has been available only in Spanish publications or in manuscript form. This much-needed English-language edition results from the collaboration of three preeminent scholars of the Pacific Northwest, who provide an in-depth introduction and extensive footnotes that make the translation accessible to a contemporary audience. Also included in this edition is a generous selection of Bodega's original charts and illustrations created by the artists who worked with Jos Mariano Mozi o and Jos Maldonado, two scientists who--at Bodega's insistence--accompanied him on his expedition to Nootka.