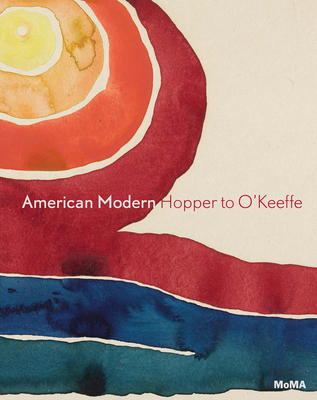 An authoritative overview of American modernism

American Modern presents a fresh look at The Museum of Modern Art's holdings of American art made between 1915 and 1950, and considers the cultural preoccupations of a rapidly changing American society in the first half of the twentieth century. Organized thematically and featuring paintings, drawings, prints, photographs and sculpture, the publication brings together some of the Museum's most celebrated masterworks, contextualizing them across mediums and amidst lesser-seen but revelatory works. The selection of works by artists such as Edward Hopper, Georgia O'Keeffe, Charles Sheeler, Charles Burchfield and Stuart Davis includes urban and rural landscapes, scenes of industry, still-life compositions and portraiture. Although varying in style and specifics, they share certain underlying visual and emotional tendencies. Cityscapes and factories are shown eerily emptied of the crush of residents that flocked to them, becoming both a celebration of clean modern forms and technological advances, as in Sheeler's paintings and photographs, and a reflection of anxiety about increasingly urban lifestyles and their consequences for the American individual, as in Hopper's iconic "Night Windows." Equally silent rural scenes are no less haunting, but perhaps reflect a nostalgia for seemingly simpler times, and a celebration of early American traditions and values. Featured still lifes are as diverse: Stuart Davis' bright, angular compositions marry fractured form with logos and patterns taken from modern advertising, while Charles Demuth's rich watercolors of fruits and vegetables celebrate agricultural bounty and his mastery of the medium. Works by Arthur Dove, Alfred Stieglitz and Andrew Wyeth, among others, suggest different possibilities in portraiture, and the diverse ways artists have thought about the figure and its absence as a way to capture their subject. This volume is a focused look at the strengths and surprises of MoMA's collection in an area that has played a rich and major role in the institution's history.