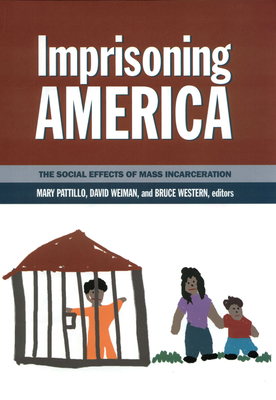 
Special Order—Subject to Availability
Over the last thirty years, the U.S. penal population increased from around 300,000 to more than two million, with more than half a million prisoners returning to their home communities each year. What are the social costs to the communities from which this vast incarcerated population comes? And what happens to these communities when former prisoners return as free men and women in need of social and economic support? In Imprisoning America, an interdisciplinary group of leading researchers in economics, criminal justice, psychology, sociology, and social work goes beyond a narrow focus on crime to examine the connections between incarceration and family formation, labor markets, political participation, and community well-being. The book opens with a consideration of the impact of incarceration on families. Using a national survey of young parents, Bruce Western and colleagues show the enduring corrosive effects of incarceration on marriage and cohabitation, even after a prison sentence has been served. Kathryn Edin, Timothy Nelson, and Rechelle Parnal use in-depth life histories of low-income men in Philadelphia and Charleston, to study how incarceration not only damages but sometimes strengthens relations between fathers and their children. Imprisoning America then turns to how mass incarceration affects local communities and society at large. Christopher Uggen and Jeff Manza use survey data and interviews with thirty former felons to explore the political ramifications of disenfranchising inmates and former felons. Harry Holzer, Stephen Raphael, and Michael Stoll examine how poor labor market opportunities for former prisoners are shaped by employers' (sometimes unreliable) background checks. Jeremy Travis concludes that corrections policy must extend beyond incarceration to help former prisoners reconnect with their families, communities, and the labor market. He recommends greater collaboration between prison officials and officials in child and family welfare services, educational and job training programs, and mental and public health agencies. Imprisoning America vividly illustrates that the experience of incarceration itself—and not just the criminal involvement of inmates—negatively affects diverse aspects of social membership. By contributing to the social exclusion of an already marginalized population, mass incarceration may actually increase crime rates, and threaten the public safety it was designed to secure. A rigorous portrayal of the pitfalls of getting tough on crime, Imprisoning America highlights the pressing need for new policies to support ex-prisoners and the families and communities to which they return.
MARY PATTILLO is associate professor of sociology and African-American Studies, Northwestern University. DAVID WEIMAN is Alena Wels Hirschorn 1958 Professor of Economics, and chair, department of economics, Barnard College. BRUCE WESTERN is professor of sociology, Princeton University.