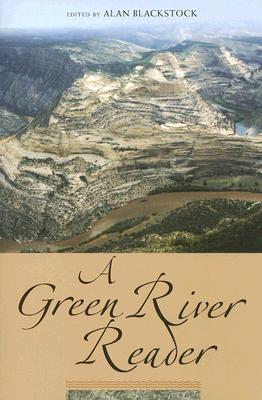 "There is something ominous about a swift river, and something thrilling about a river of any kind."—from Beyond the Hundredth Meridian by Wallace Stegner

Beginning above Flaming Gorge Dam in southwestern Wyoming, the Green River traverses the complete variety of terrain on the Colorado Plateau before joining the Colorado River above Cataract Canyon in southeastern Utah. Like its more famous cousin, the Colorado, the Green has captivated, capsized, and cajoled all types of characters with challenges and beauty to match its geologic variety.

In A Green River Reader editor Alan Blackstock brings this mysterious, magnificent, thrilling river to the reader with an interpretive guide that will inform both river novices and river veterans. Assembled here is every significant written testament to this "awesome ditch," from Domínguez-Escalante to Kit Carson and John C. Frémont; to contemporary American naturalists and writers including Wallace Stegner, Bernard DeVoto, David Brower, Ann Zwinger, Ellen Melloy, and Edward Abbey. Those with a story to tell—those who trapped the Green’s beavers, endured its wild rapids, were humbled by its imposing canyon walls, fought for its beautiful landscapes, or whose "pulse was hurried" by the "lofty chasms, walled in by precipices of red rock"—are collected here.

If you’re headed down the Green, make sure that your dry bag or ammo can has room for just one more thing, your copy of A Green River Reader.

Alan Blackstock is assistant professor of English at Utah State University. He has been known to run a river or two himself.

"It’s a whole library in one volume. Anyone interested in the many aspects of Green River history and research would have to consult dozens of volumes to get the overview that this volume offers."—Roy Webb, author of If We Had a Boat