Book of Lies: (with Commentary by the Author) (Paperback) 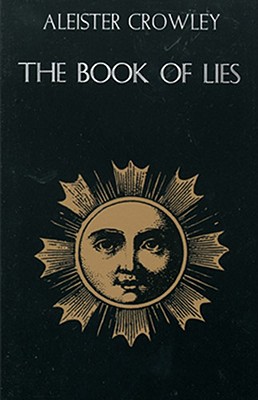 Book of Lies: (with Commentary by the Author) (Paperback)


Not On Our Shelves—Ships in 1-5 Days
This edition of master magician Aleister Crowley’s sly, witty, and instructive collection of paradoxes includes rarely published commentary by the author himself.

Written by the famed English occultist Aleister Crowley, The Book of Lies was first published in 1913. But later, around 1921, Crowley wrote a separate text of short commentary on each of the chapters to assist the reader in the qabalistic interpretation. That commentary is included in this edition from Weiser Books.

The book includes 93 chapters, each of which consists of one page of text. The chapters consist of rituals, instructions, obscure allusions, and cryptograms. The subject of each chapter is generally determined by its number and its corresponding qabalistic meaning.

“Sometimes the text is serious and straightforward,” writes Crowley of The Book of Lies, “sometimes its obscure oracles demand deep knowledge of the Qabalah for interpretation, others contain obscure allusions, play upon words, secrets expressed in cryptogram, double or triple meaning which must be combined in order to appreciate the full flavor; others again are subtly ironical or cynical. At first sight the book is a jumble of nonsense intended to insult the reader. It requires infinite study, sympathy, intuition and initiation. Given this I do not hesitate to claim that in none other of my writings have I given so profound and comprehensive an exposition of my philosophy.”
Aleister Crowley (1875-1947) was a magus, poet, sexual athlete, mountaineer, traitor, drug fiend, and Prophet of a New Eon. He has been dubbed "The Wickedest Man in the World." Author of 777, Diary of a Drug Fiend, and The Book of the Law, as well as many other books, Crowley, with Freida Harris, also created the famed Thoth Tarot Deck.