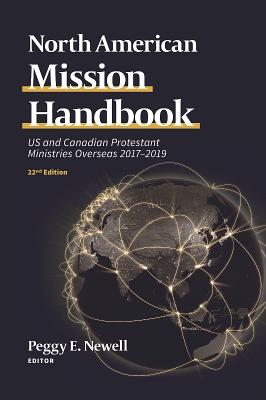 
Special Order—Subject to Availability
The 22nd Edition of the Mission Handbook Since it was first published in 1953, the Mission Handbook has only grown in its value to the mission community. In this, the 22nd edition, there is not only the most extensive, up-to-date information available on over 1400 U.S. and Canadian-based mission agencies, but also includes an in-depth analysis on trends and comparisons in North American missions. Special Features include: - Mission CEO Survey Summary - Mission Pastor Survey Summary - Mission Handbook Survey - Directory of over 1400 North American Agencies - List of Agencies and the Countries of Their Activity - Agencies by Ministry Activity or Church Tradition.
Marvin J. Newell (DMiss, Trinity Evangelical Divinity School) is senior vice president of Missio Nexus, a North American network of evangelical mission agencies and churches. He served as a missionary in Southeast Asia for two decades and professor and chair of the intercultural studies program at Moody Theological Seminary. His books include Commissioned, A Martyr's Grace, and Expect Great Things: Mission quotes that inform and inspire. Peggy E. Newell (B.S., Moody Bible Institute) is Director of Events for Missio Nexus, a North American network of evangelical mission agencies and churches. She began in ministry in 1978 when she and her husband, Marv Newell, moved to Papua (formerly Irian Jaya), Indonesia to serve at a Bible college. The Newells have 4 children and 11 grandchildren.