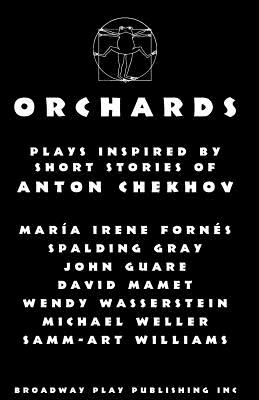 By Anton Chekhov (Based on a Book by), Maria Irene Fornes, Spalding Gray


Not On Our Shelves—Ships in 1-5 Days
(This book cannot be returned.)
This collection includes seven short plays based on Anton Chekhov's short stories: THE MAN IN A CASE by Wendy Wasserstein, VINT by David Mamet, DROWNING by Mar a Irene Forn's, A DOPEY FAIRY TALE by Michael Weller, EVE OF THE TRIAL by Samm-Art Williams, THE TALKING DOG by John Guare, and RIVKALA'S RING by Spalding Gray. The plays were commissioned by the Acting Company, and the volume is of particular interest to those concerned with both the short story and short play forms. Some of the plays are faithful adaptations of the original stories. Others take the original short stories as jumping off points and so are better characterized as "loosely based on." In all, these are fascinating short works. THE MAN IN A CASE by Wendy Wasserstein: Varinka is a free spirit in love with the older Byelinkov, the most proper man in town. But his inhibitions and worries about how he and Varinka are perceived when she boldly rides a bicycle about town threatens to unravel their impending marriage. VINT by David Mamet: Mischievous bureaucrats play a card game (vint) using identity documents in their possession until they are caught redhanded. DROWNING by Mar a Irene Forn s: A surrealist playlet in which a man performs suicides for a fee. A DOPEY FAIRY TALE by Michael Weller: A spoof fairy tale about a boy and his talking dog, Chatter, who go on a magical journey to recover his lost talent. EVE OF THE TRIAL by Samm-Art Williams: Set in Baton Rouge in 1919, the defendant of a criminal trial meets the judge who, unbeknownst to him, is to try him the following day. THE TALKING DOG by John Guare: While hang gliding in the Catskills, a young woman wonders whether the young man in her company loves her. RIVKALA'S RING by Spalding Gray: Famously astute observer of everyday life, Spalding Gray receives a Chekhov short story in the mail, leading him into a monologue that confronts the fears that beset us. "Take seven contemporary American playwrights with highly distinctive voices and wildly differing approaches to the theater. Ask each to adapt one of Anton Chekhov's short stories, which range in mood from the melancholic to the satiric - and back again ... the results are incomparably delicious ... when ORCHARDS is good - which is most of the time - it is very, very good, indeed ..." -Hedy Weiss, Chicago Sun-Times "The notion of asking seven contemporary playwrights to produce variations on themes by Anton Chekhov seems at first like asking for combination-platter theater ... All of the playwrights use Chekhov short stories for a springboard - but some have jumped so far into the deep end that it would be more accurate to say that they maybe looked at his picture while they were writing ... Whether you pick from Column A or Column B, ORCHARDS offers a superior menu." -Megan Rosenfeld, The Washington Post.