Moliere or the Cabal of Hypocrites (Paperback) 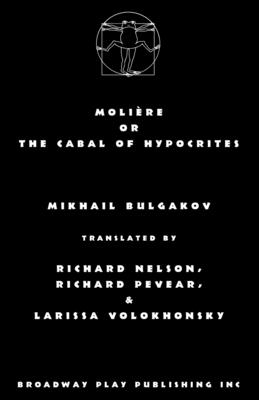 Moliere or the Cabal of Hypocrites (Paperback)

One of the world's great plays about censorship and the oppression of artists is now newly translated by the renowned translators, Richard Pevear and Larissa Volokhonksy (winner of two PEN/Book-Of-The-Month Translation Awards) and the playwright/director, Richard Nelson (Tony Award, Olivier Award).

"Put yourselves in our place, ladies and gentlemen...the performance is over."

ACT FOUR, MOLI RE OR THE CABAL OF HYPOCRITES

Premiered on February 16, 1936 at the Moscow Art Theater, MOLI RE OR THE CABAL OF HYPOCRITES was banned after seven performances.

"Invite s] the theatergoer to see an analogy between the situation of a writer under the dictatorship of the proletariat and the 'tyranny without redress' of Louis XIV."

Chairman of the Committee for the Arts of the Soviet Union