A Place on Water: Essays (Paperback) 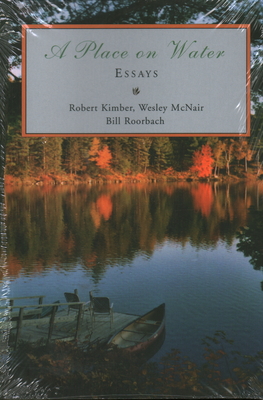 A Place on Water: Essays (Paperback)

In a trio of wonderful, long essays, a nature writer, a poet, and an essayist/novelist let us sit in on their friendship and what draws them, inexorably, to the same small pond in Maine. A joyful, unforgettable book.

Bob, living in a farmhouse near the pond, buys a dilapidated camp at the water's edge and finds his way down there almost daily, to swim or ski, depending on the season. His friends discover the allure of the pond, too--summer afternoons of swimming with Bob, his wife Rita, and an assortment of canine dog-paddlers, or companionable conversations over a beer, enjoying the beauty of a quiet pond beyond the porch. Bob tells the McNairs about a neighboring camp up for sale, a perfect little camp, compact as a ship in all its details, and they buy it. Roorbach feels drawn to the pond so strongly that he and his wife sometimes bushwack through underbrush so as not to intrude, but the pond is a place where this trio of friendships flourishes. Told with humor and affection, the stories in this small book will appeal to anyone who feels drawn to spend time near water.

Robert Kimber is a free-lance writer and translator with a special interest in outdoor and environmental subjects. Over the last fifty years, he has hiked, canoed, and snowshoed extensively in Maine, Labrador, and northern Quebec. His work has appeared in Audubon, Country Journal, Down East, Field & Stream, Harrowsmith, Horticulture, Northern Woodlands, Yankee, and other magazines. His books include A Conoeist’s Sketchbook, Upcountry: Reflections on a Rural Life, and Living Wild and Domestic: The Education of a Hunter-Gardener. Kimber and his wife, Rita, live on an old farm in Temple, Maine, and have collaborated on over forty book translations from the German.

Wesley McNair (born 1941) is an American poet, writer, editor, and professor. He has authored ten volumes of poetry, most recently, The Lost Child: Ozark Poems (David R. Godine, 2014). He has also written three books of prose, including a memoir, The Words I Chose: A Memoir of Family and Poetry. In addition, he has also edited several anthologies of Maine writing, and served as a guest editor in poetry of the 2010 Pushcart Prize Annual.

According to United States Artists, much of McNair’s poetry deals with "the struggles of the economic misfits of northern New England, often with humor and through the use of telling details." In The Words I Chose, McNair refers to the region of his poetry as "a place of farmers under threat, ethnic shop workers, traders, and misfits at the margins" and his exploration of "their American dreams, failures, self-doubts, and restlessness." McNair also writes autobiographical poems that reveal the difficulty of family bonds and critique American culture, sometimes mixing the two themes together, as in his long narrative piece "My Brother Running," in which he links his brothers fatal heart attack, after months of desperate running, with the explosion of NASA's Challenger shuttle. In his most recent collection, The Lost Child: Ozark Poems, he deals with characters and themes derived from the Ozarks of southern Missouri, where his mother grew up.

A New Hampshire native who has lived for many years in Mercer, Maine, McNair received his undergraduate degree from Keene State College and has earned two degrees from Middlebury College, an MA in English, and an M.Litt. in American literature. He has also studied American literature, art, and history at Dartmouth College, sponsored by a National Endowment for the Humanities Fellowship.As of 2014, McNair is professor emeritus and writer in residence at the University of Maine at Farmington. In March 2011 he became Poet Laureate of Maine.

Bill Roorbach (born August, 1953 Chicago, Illinois) is an American novelist, short story and nature writer, memoirist, journalist, blogger and critic. Roorbach has authored fiction and nonfiction works including Big Bend, which won the Flannery O'Connor Award for Short Fiction and the O. Henry Prize. Most recently he published the novel Life Among Giants.

Roorbach and his wife, painter Juliet Karelsen, have one daughter, Elysia Pearl

A vision of what could be
in the world beyond the pond.
— DownEast Magazine

A gem of a
book.
— Working Waterfront