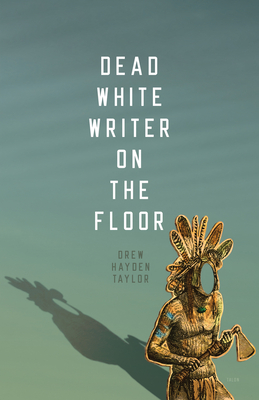 
Special Order—Subject to Availability
Dead White Writer on the Floor uses two literary conventions--theatre of the absurd and mystery novels--to create one of the funniest and thought-provoking plays ever about identity politics. In Act One, six "savages"; noble, innocent, ignorant, fearless, wise and gay, respectively; find themselves in a locked room with the body of a white writer, which they stash in a closet. None of them can figure out how he died or which of them might have killed him. They realize as they point fingers at each other, however, that they are all profoundly unhappy with their lives as they've been constructed over the past four hundred years: Old Lodge Skins wants to know what it feels like to be a young man; Billy Jack wonders what spreading healing rather than pain would feel like; Injun Joe is desperate for an education; Kills Many Enemies is exhausted by his deadly seriousness and yearns for a sense of humour; Pocahontas seeks to feel respected as a woman rather than lusted after as a child sex object; and Tonto wants to "come out of the canyon" and be the one wearing the mask for a change. Gradually, they figure out that the latest iteration of Gutenberg's invention buzzing like a beehive on the dead writer's desk is actually a dream-catcher, which they can use to rewrite their lives in the image of their own inner beings. Imagine their surprise when they reappear in the same locked room in Act Two as Mike, Jim, Bill, John, Sally and Fred--attending an A.A. meeting and bickering among themselves about reserve politics, unmanageable family relationships and whether Bingo has a place in their new air-conditioned casino--and realize the white writer must still be very much alive in their community; his body in the closet is still warm.
Drew Hayden TaylorHailed by the Montreal Gazette as one of Canada's leading Native dramatists, Drew Hayden Taylor writes for the screen as well as the stage and contributes regularly to North American Native periodicals and national newspapers. His plays have garnered many prestigious awards, and his beguiling and perceptive storytelling style has enthralled audiences in Canada, the United States and Germany. One of his most established bodies of work includes what he calls the Blues Quartet, an ongoing, outrageous and often farcical examination of Native and non-Native stereotypes.

Abstract theatre is not generally associated with comedy but judging by the laughter issuing from the packed house at Magnus’ opening night of the show, it is also drop-dead hilarious.”
The Argus