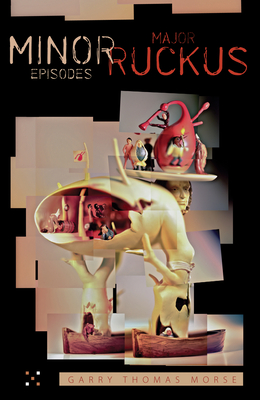 This is book number 1 in the Chaos! Quincunx series.

In tribute to the surrealist narrative techniques of Andr Breton and Robert Desnos, Minor Episodes documents the serial adventures of Minor, the ubiquitous "everymogul" who embodies the economic 1% and keeps musically erotic quixotics on tap. Having entered a "rent in time" that gives each chapter an alternate reality, Minor swaggers through an undersea casino, in-flight blockbuster, bawdy Western, and Kafkaesque job hunt, cavorting with billboard queen B b Lala and country-music legend Faith Faith, when not dressing down his shifty sidekick, The Concierge, or haunting the intensely disinterested songstress Miss Sharp. However, danger looms in the form of The Stropper, a serial killer fresh out of a shaving promotion, and an enigmatic ginger-beer icon who has retired from a satisfying life of culinary assassinations.

Major Ruckus, contrapuntal text and parody of the speculative fiction genre, celebrates the stylistic techniques of William S. Burroughs and Robert Anton Wilson, following a frenzied struggle by various parties to obtain an essential time-travel component, a struggle that includes psychic "dicks," universal call-centre operators, aboriginal eroticists, lubricant heiresses, rogue advertisement animations, pornography censors, and alien sperm-bank clones, all to the horrified fascination of hapless meta-writer Oober Mann. But ultimately, it is Carl Sagan who creates the most confusion, when his prudish doodle of a woman is sent into space via the Voyager probe, triggering a plan to "assist" the earth's declining population through extraterrestrials in the guise of census takers. Minor Episodes and Major Ruckus introduce The Chaos Quincunx series.
Garry Thomas Morse has had two books of poetry published by LINEbooks - Transversals for Orpheus (2006) and Streams (2007) - and three collections of fiction published by Talonbooks - Death in Vancouver (2009), Minor Episodes / Major Ruckus (2012), and Rogue Cells / Carbon Harbour, the latter two of which make up two of three books in The Chaos! Quincunx series. Talon has also published two books of Morse's poetry, After Jack (2010) and Discovery Passages (2011), which was a finalist for the Governor General's Award for Poetry and the Dorothy Livesay Poetry Prize, and was also voted One of the Top Ten Poetry Collections of 2011 by the Globe and Mail and One of the Best Ten Aboriginal Books from the past decade by CBC's 8th Fire. Minor Episodes / Major Ruckus was shortlisted for the 2013 ReLit Awards. Rogue Cells / Carbon Harbour was shortlisted for the 2014 ReLit Awards.Grounded in the work of Arthur Rimbaud, Robert Desnos, Ezra Pound, Jack Spicer, Rainer Maria Rilke, and his Native oral traditions, Morse's work continues to appear in a variety of publications and is studied at various Canadian universities, including the University of British Columbia. He is the recipient of the 2008 City of Vancouver Mayor's Arts Award for Emerging Artist and has twice been selected as runner-up for the Robert Kroetsch Award for Innovative Poetry. Morse is a casual commentator for Jacket2 and his work continues to appear in a variety of publications and is studied at various Canadian universities, including UBC. He currently resides in Winnipeg, Manitoba.