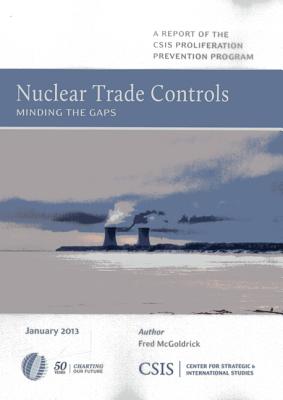 
Special Order—Subject to Availability
The merits of nuclear trade controls for helping stem proliferation have been strenuously debated for decades. Some have maintained that the policy of secrecy and denial that the United States pursued in the aftermath of Hiroshima and Nagasaki was a failure and that, instead, sharing the peaceful benefits of nuclear energy under nonproliferation controls and conditions has helped build key elements of the global regime to prevent the spread of nuclear weapons. Others argue that international nuclear trade increases the risk of nuclear-weapons proliferation. Both viewpoints have merit, and both need to be taken seriously. This report has four main elements. First, it explains the nature and importance of the nonproliferation conditions that the United States requires for its exports of nuclear materials, equipment, and technology as well as dual-use items and technology that have both nuclear and nonnuclear applications. Second, it compares these with the nuclear export controls of other exporting states as reflected in the guidelines of such multilateral arrangements as the Zangger Committee (ZC), the Nuclear Suppliers Group (NSG), and other international agreements and understandings such as the Treaty on the Non-Proliferation of Nuclear Weapons (NPT) and, where known, the specific export policies of other individual nuclear-supplier states. Third, it assesses the limits, weaknesses, successes, and failures of nuclear export controls of nuclear suppliers to date. Finally, it identifies the challenges for the future and the role that the United States should play in meeting them.
Fred McGoldrick has extensive experience in nuclear nonproliferation and international nuclear policy fields and has held senior positions in the U.S. Department of Energy and the U.S. Department of State. Since his retirement from the State Department, he has been a partner in Bengelsdorf, McGoldrick and Associates, LLC, an international consulting firm.