At the Crossroads: The Arts of Spanish America and Early Global Trade, 1492-1850 (Symposium) (Paperback) 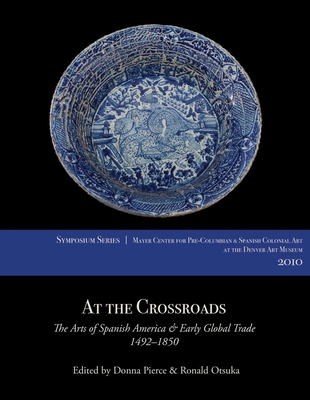 At the Crossroads: The Arts of Spanish America and Early Global Trade, 1492-1850 (Symposium) (Paperback)

The Denver Art Museum held a symposium in 2010, which was cohosted by the Frederick and Jan Mayer Center for Pre-Columbian and Spanish Colonial Art and by the Asian Art Department William Sharpless Jackson Jr. Endowment, to examine the impact of early modern globalization on the arts of Spanish America. The museum assembled an international group of scholars specializing in the arts and history of Asia, Europe, and Latin America to present recent research, with topics ranging from discussions of architecture, painting, and sculpture to engravings, ceramics, clothing, and decorative arts of the period. Edited by Denver Art Museum curators Donna Pierce and Ronald Otsuka, this volume presents revised and expanded versions of papers presented at the symposium.

Dana Liebsohn (Smith College) opens the volume with a thought-provoking discussion of the reception and reinterpretation of Asian motifs in the various art forms of viceregal New Spain (Mexico) and the complexities of interpreting those today. Through a detailed analysis of shipping records, Mar a Bonta de la Pezuela (Sotheby's, New York) addresses the Manila galleon trade and the exportation of Chinese porcelain to the Americas. William Sargent (Peabody-Essex) expands on this topic by examining a set of specific pieces of Chinese porcelain produced for export. Jaime Mariazza (Universidad de San Marcos, Lima, Peru) describes the importation of funerary traditions from Europe to Peru via books and engravings and their implementation in Peru by local artists. And independent scholar Suzanne Stratton-Pruitt analyzes the exportation of paintings "by the dozens" from Spain to Peru, examining their impact on local painting traditions.

Two papers then address the exportation of distinctively American objects to Europe. Sara Ryu (Yale University) presents the results of recent research on corn-paste sculptures from Mexico, which were sent to Europe during the early modern era, and their reception there. The unique genre of casta (caste) paintings, invented in New Spain and exported to Europe, is examined by Claire Farago and James C rdova (University of Colorado). Donna Pierce closes the volume with a case study on the global range of trade objects, presenting documentary evidence for the presence of Asian trade goods in New Mexico--the northern-most province of the Spanish Americas.

An interdisciplinary study bringing together new research on an understudied era and area, this well-illustrated volume will be an important resource for scholars and enthusiasts of early modern history in general and Latin American art and history in particular.