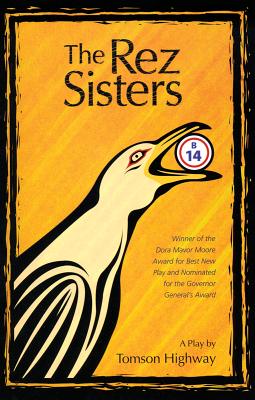 Nominated for the Governor General's Award

This award-winning play by Native playwright Tomson Highway is a powerful and moving portrayal of seven women from a reserve attempting to beat the odds by winning at bingo. And not just any bingo. It is THE BIGGEST BINGO IN THE WORLD and a chance to win a way out of a tortured life.

The Rez Sisters is hilarious, shocking, mystical and powerful, and clearly establishes the creative voice of Native theatre and writing in Canada today.

Tomson Highway is a celebrated playwright, novelist, and children's author. He is the author of the earlier picture books in the Songs of the North Wind trilogy, Fox on the Ice and Caribou Song. He is also the author of the plays The Rez Sisters and Dry Lips Oughta Move to Kapuskasing, both of which won him the Dora Mavor Moore Award and the Floyd S. Chalmers Award. He lives in the Ottawa area.