Why Does Michelangelo Matter?: A Historian's Questions about the Visual Arts (Hardcover) 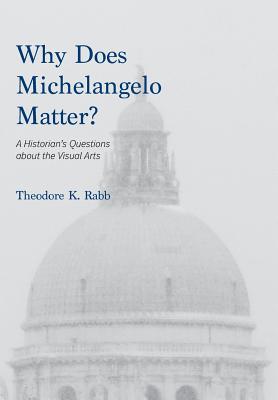 Why Does Michelangelo Matter?: A Historian's Questions about the Visual Arts (Hardcover)

Every human society has produced images, and to try to really understand history, we need to study its visual arts as carefully as its written documents; ignore visual arts at your peril. With increasing success, Theodore Rabb, an eminent historian, has been making this important point ever since the 1970s, in articles and reviews directed towards his colleagues and members of the educated public alike. While focusing on European history, his chronological sweep has been wide, stretching from the late Middle Ages to the 1920s, and he discusses all forms of imagery--drawing, painting, engraving, sculpture, and architecture.

Intended for interested general readers as well as historians and art historians, this book contains a collection of Rabb's best essays--superbly written, and thoroughly engaging, it can be hard to put the book down. Appropriately, the title essay is a discussion of Michelangelo, whose work is essential to an understanding of his society. The essays that follow are divided into sections that concentrate on specific topics or regions, and they are shaped as questions whose answers demonstrate the ways in which historians can learn from the arts. These essays reflect the growing interest in that cross-disciplinary work, and in turn encourage an ever broader engagement with it.

"This is a marvelous introduction to Renaissance, Baroque, and later art that also doubles as an eloquent manifesto for the historical usefulness of images. The impressive inter-disciplinary scope of these essays sheds new light on multiple dimensions of early modern European history while transcending time and place.Moreover, Rabb's prose style, erudition, and perspicuity set a new benchmark for the writing of cultural history. This book should be required reading for every historian, everywhere, regardless of their area of specialization. It should also be ardently recommended to anyone who yearns to be truly learned."

"Ted Rabb is one of the few historians as comfortable with both visual and verbal evidence. In this masterly collection, he guides us through the history of western art from the early Renaissance to twentieth-century Germany to raise big questions and weigh great reputations. There is something for everyone in his bursting Wunderkammer of a book."