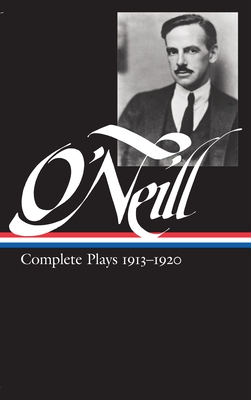 
Special Order—Subject to Availability
The only American dramatist awarded the Nobel Prize for Literature, Eugene O’Neill wrote with poetic expressiveness, emotional intensity, and immense dramatic power. This Library of America volume (the first in a three-volume set) contains twenty-nine plays he wrote between 1913, when he began his career, and 1920, the year he first achieved Broadway success.

Many of O’Neill’s early plays are one-act melodramas whose characters are caught in extreme situations. Thirst and Fog depict shipwreck survivors, The Web a young mother trapped in the New York underworld, and Abortion the aftermath of a college student’s affair with a stenographer.
His first distinctive works are four one-act plays about the crew of the tramp steamer Glencairn that render sailors’ speech with masterful faithfulness. Bound East for Cardiff, In the Zone, The Long Voyage Home, and The Moon of the Caribbees portray these “children of the sea” as they watch over a dying man, sail though submarine-patrolled waters, take their shore leave in a London dive, and drink rum in a moonlit tropical anchorage.

In Beyond the Horizon Robert Mayo begins a tragic chain of events by abandoning his dream of a life at sea, choosing instead to marry the woman his brother loves and remain on his family farm. The sea in “Anna Christie” is both “dat ole devil” to coal barge captain Chris Christopherson and a source of spiritual cleansing to his daughter Anna, an embittered prostitute. When a swaggering stoker falls in love with her, Anna becomes the apex of a three-sided struggle full of enraged pride, grim foreboding, and stubborn hope. Both of these plays won the Pulitzer Prize and helped establish O’Neill as a successful Broadway playwright.

The Emperor Jones depicts the nightmarish journey through a West Indian forest of Brutus Jones, a former Pullman porter turned island ruler. Fleeing his rebellious subjects, Jones confronts his violent deeds and the tortured history of his race in a series of hallucinatory episodes whose expressionist quality anticipates many of O’Neill’s later plays.

LIBRARY OF AMERICA is an independent nonprofit cultural organization founded in 1979 to preserve our nation’s literary heritage by publishing, and keeping permanently in print, America’s best and most significant writing. The Library of America series includes more than 300 volumes to date, authoritative editions that average 1,000 pages in length, feature cloth covers, sewn bindings, and ribbon markers, and are printed on premium acid-free paper that will last for centuries.
Eugene O'Neill (1888-1953) is one of the most significant forces in the history of American theater. With no uniquely American tradition to guide him, O'Neill introduced various dramatic techniques, which subsequently became staples of the U.S. theater. By 1914 he had written twelve one-act and two long plays. Of this early work, only Thirst and Other One-act plays (1914) was originally published. From this point on, O'Neill's work falls roughly into three phases: the early plays, written from 1914 to 1921 (The Long Voyage Home, The Moon of the Caribbees, Beyond the Horizon, Anna Christie); a variety of full-length plays for Broadway (Desire Under the Elms; Great God Brown; Ah, Wilderness!); and the last, great plays, written between 1938 and his death (The Iceman Cometh, Long Day's Journey Into Night, A Moon for the Misbegotten). Eugene O'Neill is a four-time Pulitzer Prize winner, and he was awarded the Nobel Prize in literature in 1936.