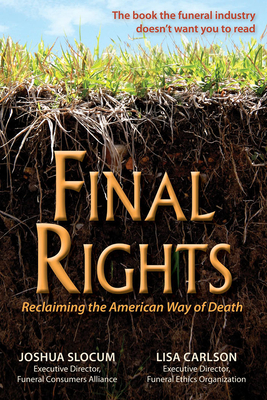 
Not On Our Shelves—Ships in 1-5 Days
Decades after Jessica Mitford stunned America with vivid accounts of corruption and abuse in the death industry, not much has improved. Families are manipulated into buying expensive goods and services they don't need or want. Prepaid funeral money vanishes into thin air. Body parts are sold on the black market. Eight states force families to pay a funeral director even if they conduct a home funeral with no need for help. But a consumer movement is no awakening, and Americans are asserting their rights over a key part of life, just as they did in the past with the natural childbirth and hospice movements. The two most prominent leaders of that movement are the authors of this book: Joshua Slocum, executive director of Funeral Consumers Alliance, and Lisa Carlson, executive director of Funeral Ethics Organization. Here they join forces to expose wrongdoing, inform consumers of their rights, and propose legal reforms. The book includes state-by-state summaries of laws, regulations, services, and consumer concerns.
Joshua Slocum is executive director of Funeral Consumers Alliance, a national consumer advocacy group with over 90 chapters nationwide. FCA is the primary watchdog over consumer abuses by the funeral industry.Lisa Carlson, a former executive director of FCA, is now executive director of Funeral Ethics Organization, a nonprofit working with the funeral industry to improve ethical standards and consumer protections.